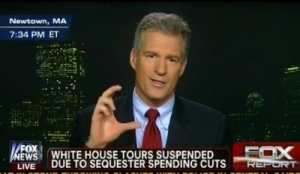 I’ll leave it to my friend John Carroll to analyze the dust-up between the Boston Globe and the Boston Herald over whether former senator Scott Brown is or isn’t still working for Fox News. (Short answer: he is.) No doubt that’s coming later today.

So just a quick observation. On Wednesday the Globe’s Joshua Miller quoted an unnamed source at Fox who told him that Brown was “out of contract,” thus fueling speculation that Brown was about to jump into New Hampshire’s U.S. Senate race. It turns out, according to the Herald’s Hillary Chabot and Miller’s follow-up report, that Brown was merely between contracts, and that he’s now re-upped.

If I were Miller or an editor at the Globe, I would love to be able to point to a named source at Fox for passing along information that may have been technically accurate but was not actually true. But they can’t, and that’s one of the hazards of granting anonymity.

It’s especially dangerous with Fox. According to NPR media reporter David Folkenflik’s book “Murdoch’s World,” the fair-and-balanced folks once went so far as to leak a false story to a journalist — anonymously, of course — and then denounce him in public after he reported it.

Of course, this all leads to the political question of the moment: Does this mean Brown isn’t running for senator? Or president? Or whatever office he is thought to be flirting with this week?

After NPR chief executive Vivian Schiller said Juan Williams should keep his feelings about Muslims between himself and “his psychiatrist or his publicist,” I thought perhaps it was Schiller who ought to schedule some couch time. She apologized, and today she’s in damage-control mode.

NPR media reporter David Folkenflik did something very smart (which I learned about through Jack Shafer’s Twitter feed): he refused to attend an off-the-record staff meeting about Williams’ firing following offensive comments he made on Fox News. Instead, Folkenflik pieced together what happened by interviewing some of those who did attend. Based on Folkenflik’s tweets, Schiller seems to have hit the right notes. (I’m running them in chronological order rather than the usual reverse chrono:

The all-staff meeting was off the record, so I did not attend. However, staffers who did told me the following:

Schiller said decision to give Wms notice was not because of slip of the tongue, but latest in a series of violations of NPR ethics policy

Schiller said it had been raised several times but that he continued to inject personal opinon in his analysis in settings outside NPR.

Schiller said at some point, you have to draw the line. (more)

Though she called it the right decision, Schiller also said NPR did not handle Wms’ ouster well. She promised staffers a “full post-mortem.”

Schiller also said she was ambushed leaving her home by a two-person camera crew identifying itself as being from Fox News.

I feel a little better about this than I did yesterday. Schiller did the right thing for the wrong reason at the wrong time. What’s important is that she knows she blew the handling of it. No way she can undo it — not after Fox News rewarded Williams with a three-year, $2 million deal. But at least she seems determined to make the best of a bad situation. It sounds like she’s adopted the views of NPR ombudsman Alicia Shepard, who writes that “a more deliberative approach might have enabled NPR to avoid what has turned into a public relations nightmare.”

Here is our discussion of the Williams matter on tonight’s “Beat the Press.” I’m also quoted in a Christian Science Monitor story on the hazards of straddling the reporter/analyst/commentator divide.