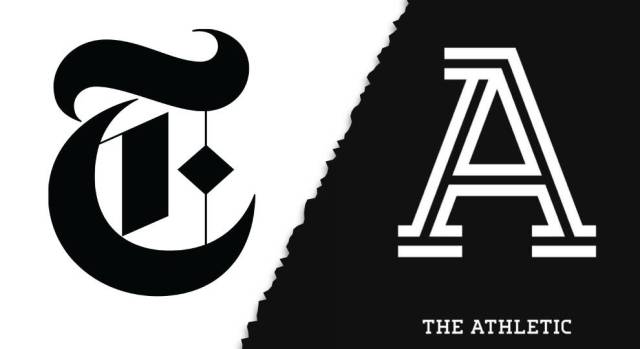 Imagine that you’re the editor of a big-city daily newspaper whose reporting staff has been slashed by its corporate owner. You struggle to cover the basics — local politics, business, the arts. But you’ve managed to preserve a fairly robust sports section. After all, a lot of your readers are avid fans. If they no longer needed to come to you for coverage of their favorite teams, then your circulation, already sliding, would fall off a cliff.

Well, your worst nightmare just came true. The New York Times Co.’s announcement last Thursday that it was buying The Athletic represents nothing less than an existential crisis for regional newspapers.

The Athletic is a five-year-old website that covers sports — not just national sports, but local sports as well. If sports is the only reason you haven’t stopped subscribing to your local newspaper, that’s about to change. You’ll soon be able to buy a digital subscription to The New York Times that includes The Athletic’s coverage.

“This acquisition should make mid-market metro newspaper publishers shudder,” wrote David Skok, a former top editor at The Boston Globe who’s now the editor of a Canadian business website he founded called The Logic. “The Times can now offer a unique bundle of international, national and local news that offers readers a value proposition better than that of many local newspapers with eroding sports coverage and whose news sections largely consist of wire copy from The Associated Press, Reuters and even The New York Times’ syndication service.”

The Times Co.’s acquisition of The Athletic was a certified big deal. The company paid $550 million in cash, making it the Times’ largest takeover since it purchased The Boston Globe for $1.1 billion in 1993, according to Alex Webb of Bloomberg Businessweek. (The Times Co. sold the Globe to Red Sox principal owner John Henry in 2013 for $70 million — among the more devastating markdowns in media history.)

The Athletic, with 1.2 million subscribers, will help push the Times’ paid circulation for all of its projects from about 8 million closer to its goal of 10 million. The Athletic is currently a money-loser, but, as Webb writes, the Times Co. will seek to close the gap by selling more advertising and by “cross-selling the products: persuading existing Times subscribers to pay for the Athletic and vice versa.”

That strategy has already proven successful with other Times products such as its Cooking app and Wirecutter, a consumer recommendation site that it acquired several years ago. Although the Times Co. hasn’t announced exactly how The Athletic will be priced, it seems likely that it will be included with its All Access digital subscription and sold separately to those who have a cheaper Basic subscription, or no Times subscription at all.

It’s the attractiveness of getting The Athletic bundled with an All Access subscription to the Times that has got to be causing local newspaper executives to break into a cold sweat. You might think that the best way for local newspapers to fight back is by offering quality. And, of course, there’s something to that. But cultural changes, not just newsroom reductions, put local news at an enormous disadvantage.

We are living at a moment when national trends trump anything taking place at the local level. We follow national news avidly — if not quite as obsessively as we did during Donald Trump’s presidency — while paying less and less attention to what is going on in our communities. Even local school committee races are dominated by national issues such as critical race theory rather than math scores and who can most effectively negotiate a new contract with the teachers union.

Given those trends, a high-quality regional paper like the Globe may not be safe from the Times-Athletic juggernaut. The economies of scale being what they are, an All Access subscription to the Times is actually a little bit cheaper than a digital subscription to the Globe. In addition, surely there is a contingent of Globe readers who come for the sports and don’t care all that much about the paper’s comprehensive regional coverage. It’s a good thing that the Globe’s sports reporting continues to be as strong as it is.

Aron Pilhofer of Temple University puts it this way: “The Times has placed itself in direct competition with every local news site for the same pool of subscribers. And since the average number of news sites people will pay for is one, that is very bad news indeed for local legacy news organizations.”

What’s especially disconcerting is that the Times is pulling away from the journalistic pack to an extent that couldn’t have been imagined a few years ago. Since the late aughts, the paper has avoided a close call with bankruptcy, moved far ahead in its competition with the resurgent Washington Post and now is threatening to overwhelm large swaths of the regional media ecosystem.

At a time when local news is in crisis, with newsrooms downsizing and papers closing, the Times’ dominance is starting to look like a threat to our ability to inform ourselves about what’s taking place in our communities and neighborhoods.

The acquisition of The Athletic may be good for the Times. It remains to be seen whether it’s good for democracy.

When Amazon.com founder Jeff Bezos bought The Washington Post last year for the paltry sum (especially for him) of $250 million, newspaper observers hoped that it presaged a new era for the struggling daily. For now, at least, it looks like those hopes are becoming a reality.

The Post is ramping up. Michael Calderone of The Huffington Post reported recently that the paper has hired 50 full-time staff journalists so far in 2014, and that it is making at least a partial return to its status as a national newspaper — a status it had retreated from during the final years of Graham family ownership. Executive editor Marty Baron told Calderone:

We’ve talked a lot about the need to grow. We’ve said that in order to grow, we have to look outside our own immediate region and the only opportunity for growth is digital. We are looking at growth opportunities around the country.

Richard Byrne Reilly recently wrote in VentureBeat that Bezos isn’t quite the hands-off owner that he appears to be, taking a deep interest in the paper’s digital initiatives. According to Reilly:

With chief information officer and technology vice president Shailesh Prakash at the helm, Bezos is pumping cash into the once staid company’s IT infrastructure. Lots of it. The new leadership has put 25 computer engineers into the newsroom, helping reporters craft multifaceted digital stories for mobile devices.

The Post’s expansion is a heartening development, and it’s one we’re seeing unfold in Boston as well. Red Sox principal owner John Henry, whose $75 million purchase of The Boston Globe was announced just days before Bezos said he was buying the Post, has, like Bezos, shown a willingness to try to grow his news organization out of the doldrums into which it had fallen.

The Globe is making some interesting moves into video; has redesigned its nearly two-decade-old free Boston.com site while moving all Globe content behind a flexible paywall at BostonGlobe.com; has developed new verticals for innovation and technology (BetaBoston) and arts and entertainment (RadioBDC and BDCWire); and will soon unveil a standalone site covering the Catholic Church.

As for the Post, it’s notable that its comeback coincides with a serious misstep at The New York Times — the botched firing of executive editor Jill Abramson. Combined with the loss this week of the Times’ chief digital strategist, Aron Pilhofer, to The Guardian, and the release of an internal report criticizing the Times’ own digital strategy, it may not be an exaggeration to suggest that energy and momentum have swung from the Times to the Post. (To be sure, the Times’ new executive editor, Dean Baquet, enjoys an excellent reputation.)

From the Pentagon Papers and Watergate in the early 1970s until about a decade ago, the Times and the Post were often mentioned in the same breath as our two leading newspapers. Good as the Post was during the final years of the Graham era, budget-cutting allowed the Times to open up a lead and remain in a category of its own.

It would be great for journalism and for all of us if Bezos, Baron and company are able to level the playing field once again.

Photo (cc) by Steve Jurvetson and used under a Creative Commons license. Some rights reserved.