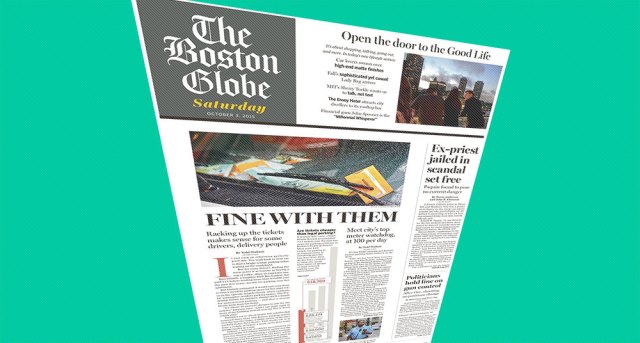 If you’d asked me 10 years ago if I thought The Boston Globe and other metropolitan dailies would still be printing news on dead trees in 2015, I’d have replied, “Probably not.” Even five years ago, by which time it was clear that print had more resilience than many of us previously assumed, I still believed we were on the verge of drastic change — say, a mostly digital news operation supplemented by a weekend print edition.

Seen in that light, the Globe’s redesigned Saturday edition should be regarded as a cautious, incremental step. Unveiled this past weekend, the paper is thinner (42 pages compared to 52 the previous Saturday) and more magazine-like, with the Metro section starting on A2 rather than coming after the national, international and opinion pages. That’s followed by a lifestyle section called Good Life.

The larger context for these changes is that the existential crisis threatening the newspaper business hasn’t gone away. Revenue from print advertising — still the economic engine that powers virtually all daily newspapers — continues to fall, even as digital ads have proved to be a disappointment. Fewer ads mean fewer pages. This isn’t the first time the Globe has dropped pages, and I’m sure it won’t be the last. (The paper is also cutting staff in some areas, even as it continues to hire for new digital initiatives.)

The Globe’s response to this ugly drop has been two-fold. First, it’s asked its print and digital readers to pick up more of the cost through higher subscription fees. Second, even as the print edition shrinks, it has expanded what’s offered online — not just at BostonGlobe.com, but via its free verticals covering the local innovation economy (BetaBoston), the Catholic Church (Crux) and, soon, life sciences and health (Stat). Stories from those sites find their way into the Globe, while readers who are interested in going deeper can visit the sites themselves. (An exception to this strategy is Boston.com, the former online home of the Globe, which has been run as a separate operation since its relaunch in 2014.)

“I don’t quite think of it as the demise of print,” says Globe editor Brian McGrory of the Saturday redesign. He notes that over the past year-plus the print paper has added the weekly political section Capital as well as expanded business and Sunday arts coverage and daily full-size feature sections in place of the former tabloid “g” section.

Some of those cuts in print are offset by more digital content. Consider the opinion pages, which underwent a redesign this past spring. (I should point out that McGrory does not run the opinion pages. Editorial-page editor Ellen Clegg, like McGrory, reports directly to publisher John Henry.) The online opinion section is simply more robust than what’s in print, offering some content a day or two earlier as well as online exclusives. This past Saturday, the print section was cut from two pages to one. Yet last week also marked the debut of a significant online-only feature: Opinion Reel, nine short videos submitted by members of the public on a wide variety of topics.

All are well-produced, ranging from an evocative look at a family raising a son with autism (told from his sister’s point of view) to a video op-ed on dangerous bicycle crossings along the Charles River. There’s even a claymation-like look at a man living with blindness. But perhaps the most gripping piece is about a man who was seriously beaten outside a bar in South Boston. It begins with a photo of him in his hospital bed, two middle fingers defiantly outstretched. It ends with him matter-of-factly explaining what led to the beating. “It was because I stepped on the guy’s shoe and he didn’t think I was from Southie,” he says before adding: “It was my godmother’s brother.”

Globe columnist and editorial board member Joanna Weiss, who is curating the project, says the paper received more than 50 submissions for this first round. “It has very much been a group effort,” Weiss told me by email. “The development team built the websites and Nicole Hernandez, digital producer for the editorial page, shepherded that process through; Linda Henry, who is very interested in promoting the local documentary filmmaking community, gave us feedback and advice in the early rounds; David Skok and Jason Tuohey from BostonGlobe.com gave indispensable advice in the final rounds, and of course the entire editorial board helped to screen and select the films.”

But all of this is far afield from the changes to the Saturday paper and what those might portend. McGrory told me he’s received several hundred emails about the redesign, some from readers who liked it, some who hated it and some who suggested tweaks — a few of which will be implemented.

Traditionally, a newspaper’s Saturday edition is its weakest both in terms of circulation and advertising. In the Globe’s case, though, the Monday, Tuesday and Wednesday papers sell a few thousand fewer copies than Saturday’s 160,377, according to a 2014 report from the Alliance for Audited Media. No doubt that’s a reflection of a Thursday-through-Sunday subscription deal the Globe offers — though it does raise the question of whether other days might get the Saturday treatment.

“We have no plans right now to change the design or the general format of those papers,” McGrory responds. “But look, everything is always under discussion.” (The Globe’s Sunday print circulation is 282,440, according to the same AAM report. Its paid digital circulation is about 95,000 a day, the highest of any regional newspaper.)

One question many papers are dealing with is whether to continue offering print seven days a week. Advance Newspapers has experimented with cutting back on print at some of its titles, including the storied Times-Picayune of New Orleans. My Northeastern colleague Bill Mitchell’s reaction to the Globe’s Saturday changes was to predict that, eventually, American dailies would emulate European and Canadian papers by shifting their Sunday papers to Saturdays to create a big weekend paper — and eliminating the Sunday paper altogether.

The Globe and Mail of Toronto is one paper that has taken that route, and McGrory says it’s the sort of idea that he and others are keeping an eye on. But he stresses that the Globeisn’t going to follow in that path any time soon.

“Right now we have no plans to touch our Sunday paper,” he says. “It’s a really strong paper journalistically, it’s a strong paper circulation-wise, it’s a strong paper advertising-wise. We’re constantly thinking and rethinking this stuff. But as of this conversation, Sunday is Sunday and we don’t plan to change that at all.”

He adds: “We’re trying to mesh the new world with the printing press, and I think we’re coming out in an OK place. Better than an OK place. A good place.”