I’ll be leading a discussion on “Blogging, Social Media and Journalism” tomorrow from 10:45 a.m. to noon at the annual convention of the New England Newspaper & Press Association at the Park Plaza. I’ve put together some slides (above), but I’m conceiving this session as an unconference, and I want to turn it over to the editors and reporters who’ll be attending as quickly as possible.

The blabbing continues. From 3:45 to 5 p.m., Adam Gaffin of Universal Hub and I will lead a workshop on “Writing for the Web.”

Now, to get back to those slides (and sorry for the funny line breaks; there’s something about SlideShare that I’m obviously missing). There are a number of examples I’ll be talking about that are worth taking a deeper look at. So I thought I’d post some links here.

Adam Gaffin of Universal Hub has some big-time fun with the Boston Herald’s story on city employees who use Facebook and Twitter during work hours. Gaffin reproduces a photo of the Herald reporters who wrote the story, Jessica Heslam and Dave Wedge, from — yes — Heslam’s Facebook account.

Kidding aside, you have to admit that there’s an appearance problem with the way some city employees are using social media. Heslam and Wedge focus on Amy Derjue, a former Boston Magazine blogger who was hired earlier this year to serve as City Council president Mike Ross’ $39,000-a-year spokeswoman.

Derjue is something of a young-woman-about-town, and I follow her on both Facebook and Twitter. (If you page through her 340 Facebook friends, you’ll see a wide array of local media and political folks, including Gaffin, me — and Wedge.) Some of her posts make me cringe, and Heslam and Wedge dutifully provide some cringe-worthy examples. But I’ve never heard anyone suggest she wasn’t smart, hard-working and energetic. For what it’s worth, she has complained to me on behalf of her boss, which suggests dedication to her job.

More to the point, most of us — and you can be sure Derjue falls into this category — are never fully off work. If we’re expected to tend to business when we’re off-duty, then we have to be allowed some fun during the formal workday as well. And, as Gaffin writes, “Why, it takes sheer seconds to post something to Facebook or Twitter.”

An aside that may help illustrate my point. Yesterday John Robinson, editor of the News & Record in Greensboro, N.C., tweeted that he was being yelled at by a “legislator who resigned in disgrace.” When I responded at how impressed I was with his multi-tasking, he replied, “Yes, tweeting while yelling. What else am I supposed to do? Listen?” This was not a private conversation — it was seen by all 1,196 of Robinson’s followers and all 2,019 of mine. Welcome to 2009.

Ross tells the Herald that he hired Derjue in part for her social-networking expertise. And, indeed, Ross has a pretty lively Twitter feed and Facebook account. For Derjue to post to her personal sites while working on her boss’ would, as Gaffin says, take “sheer seconds.” You can question her judgment, but her social-media activities are not evidence of dereliction.

Derjue seems to have partly disabled her Facebook account (I could be wrong; Facebook mystifies and annoys me), and she hasn’t posted to Twitter since last night. No doubt she’s licking her wounds at the moment. I’m interested to see how she’ll respond.

Thanks to four excellent panelists and an interested and engaged audience, we had a great time last night at a discussion titled “Are Blogs and Twitter Improving the Dissemination of Information and News?”

The panel was held at the historic Vilna Shul on Beacon Hill — a bit of a nostalgia trip for me, as I lived less than a block away in 1979-’80.

I’ve posted an MP3 of the discussion. There’s a lot of reverb, and it is difficult to hear members of the audience, who did not use the mic. My apologies. The panelists, in the order in which they spoke, were:

And thanks to Doug Levin, who put together the program.

Next Wednesday, Sept. 16, I’ll be moderating an all-star panel on journalism, blogging and social media. Titled “Are Blogs and Twitter Improving the Dissemination of Information and News?,” the panel will feature:

With that many bright minds in the room, I may have to wear shades.

The program will take place from 6 to 8 p.m. at the Vilna Shul, located on Beacon Hill at 18 Phillips St. Please join us.

All-important food-related update: Doug Levin, who’s organizing the event, asks that you send an e-mail to doug {at} vilnashul {dot} com if you’re planning on coming so that he can order enough food. If you’re not looking to eat, you could show up at about 6:45, when the program will begin.

Adam Gaffin talks with Left Ahead! (The exclamation point is theirs.)

The Boston Globe may be getting smaller, but it was just handed an opportunity to do something very intelligent. Let’s see if it can rise to the occasion.

Adam Gaffin, the chief impresario and co-founder of Universal Hub, just lost his day job as an online editor for the trade publication Network World. UH, if you don’t already know, is a “best of the blogs” site — an essential guide to nearly 1,000 local blogs in Greater Boston, all informed by Adam’s love of his adopted hometown and his puckish wit.

The Globe should hire Gaffin. I’ve been saying it to anyone who’d listen for quite a while now. Adam Reilly of the Boston Phoenix said it just last week. Yes, yes, the financially ailing Globe is in the midst of downsizing its newsroom by 50 people. But with fewer reporters, the paper is in more need than ever of someone who can intelligently aggregate content from a wide variety of sources. No one is better at it than Gaffin.

Recently, as you know, the Globe tried its hand at automated aggregation. It didn’t work out.

Gaffin’s ability to find what’s interesting, entertaining and important while holding down a demanding day job has always been awe-inspiring. If he were able to devote his full attention to it, Universal Hub would only become better. (In most respects, anyway. No doubt he would no longer offer his acidic observations about certain Globe columnists.)

Gaffin has been affiliated with the Globe in the past — for a while he wrote a roundup for the Sunday paper’s City Weekly supplement.

Do I have a conflict of interest? Yes, and thank you for asking, though it cuts the other way. Adam also runs the Boston Blogs ad network, which automatically places advertising on Media Nation and many other local blogs. Lately it’s been doing well enough to cover my Internet access fees. Were Adam to go to the Globe, I imagine we’d be left high and dry.

If the Globe is to reinvent itself, it’s going to have to act as a trusted guide to the best content out there. It should start with Gaffin. 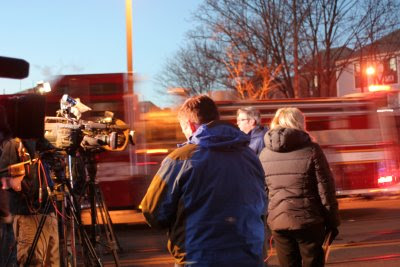 Jared Molton, a student in my Reinventing the News course at Northeastern this past fall, was on the scene today following that fatal fire-truck crash on Huntington Avenue. He wrote it up for his blog and posted a slideshow to Flickr. His work then got picked up by Universal Hub.

I make money from ads on pages with links to GateHouse articles, so effective immediately, I won’t be linking to any more articles on GateHouse sites. It’s a shame, GateHouse papers do some good work and they seemed to understand how the Web is built, but the last thing I need is to defend myself from a lawsuit over hyperlinks.

The lawsuit is barely a few hours old, and already there’s collateral damage.