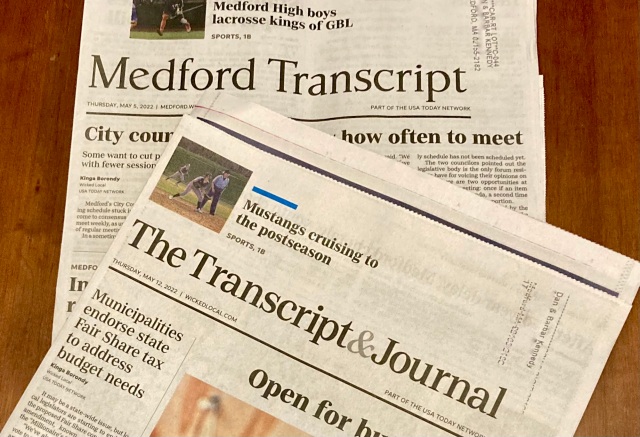 Like COVID or an overdue tax bill, the debut issue of The Transcript & Journal made its unwelcome appearance in our home earlier today. The weekly paper is a mash-up of Gannett’s Medford Transcript and Somerville Journal, a move that was announced earlier this year as part of the chain’s decision to eliminate 19 Massachusetts weeklies and merge nine others into four.

Last week’s final issue of the Medford Transcript had local news on the front page — a story about a debate among city council members on whether they should continue to meet weekly or switch to every other week and a report on efforts to build a replacement for (or substantially renovate) Medford High School.

But the front of The Transcript & Journal, as promised, replaces all that with regional news such as the Fair Share proposal to implement a statewide tax on millionaires and the opening of new restaurants in far-flung locales such as Brighton and Kingston. Meanwhile, there’s nothing on a story reported by The Boston Globe earlier this week on a civil-rights complaint filed against the Medford Police Department in which two Black residents say they were unlawfully stopped.

There is one Medford article on the front — a feature on a 10-year-old walking loop that recognizes the city’s historic landmarks. It’s a good story about something I wasn’t familiar with. It was also written by a journalism student at Endicott College. Now, journalism students are some of my favorite people. But we see what’s going on here, right?

And that’s it for the A section other than press releases, obituaries and a story about restaurants at the Burlington Mall. The B section, devoted to local sports, seems pretty much unchanged, but it was thin to begin with.

At a webinar earlier this week organized by the Shorenstein Center at the Harvard Kennedy School, Mizell Stewart III, vice president of news performance, talent and partnerships for Gannett and the USA Today Network, described the move as an attempt to drive digital subscriptions and to focus on local news that has a greater impact on people’s lives.

“Covering local news continues to be very labor intensive and very expensive,” Stewart said. The idea is to take “a more regional approach” and focus on “commonalities and trends.” But isn’t that why we have regional media like The Boston Globe, public radio and local TV newscasts?

This will not end well.

The Boston Institute for Nonprofit Journalism has an interview with Julia Taliesin, the only reporter at Gannett’s Somerville Journal, on what it’s like to work at an under-resourced corporate-owned newspaper. Key quote:

I am acutely aware that it is absolutely impossible for me to do justice to what the city deserves in terms of news. What Somerville deserves is a handful of reporters who watch every city council meeting, or at least 90% of them, because this city council is busy. When I think of what effective news looks like, it’s just that. It’s just enough people to cover the issues. Not the press conferences and the press releases, but the actual work and the legislating that goes on.

I should note that Somerville has more than 80,000 residents. Next door, the Gannett-owned Medford Transcript hasn’t had a full-time staff reporter to cover the city’s 57,000 residents since the fall of 2019.

Earlier today I broke the news that GateHouse Media is closing its office in Somerville and laying off staff, with the Somerville Journal to be run out of the company’s Danvers office and the Cambridge Chronicle out of Lexington.

Two sources tell me @GateHouse_Media is closing its Somerville office and laying off some staff. Lovely.

More on @GateHouse_Media: I'm told the Somerville Journal will be run out of Danvers and the Cambridge Chronicle out of Lexington.

@cdevers @DMcLeanWL No layoffs in Somerville but our office will likely be closed in a few months. But we'll still be around in town a lot

The Boston Business Journal followed up with additional details, including the fact that Wayne Braverman, a longtime GateHouse employee who’s a group managing editor, would be losing his job.

You need a presence in the community—a place where folks can drop in with an obit, a press release, or to give someone a piece of his or her mind. Local newspaper offices have become a rare species over the past 40 years, though some papers—no longer encumbered by the need to have their printing presses close at hand—have been reversing that trend.

I don’t expect readers of the Somerville and Cambridge papers will notice much difference, and I should note that the Medford Transcript is already run out of Danvers. But I moved from Danvers to Medford a little over a year ago, and let’s just say that the two communities are not close. And Somerville is probably another 10 minutes farther away. The Cambridge-Lexington connection isn’t quite as absurd, but how can a city as large and engaged as Cambridge not have its own newspaper office?

We’ve been having a robust conversation on Facebook about GateHouse’s latest move to squeeze out every last drop of blood from its hardworking employees. Please join in.