I recently wrote about my visit to Sally’s Apizza in New Haven, the only one of the city’s three legendary pizza places I hadn’t been to. Well, last week I was back in New Haven — and I decided to revisit Frank Pepe’s and Modern Apizza so I could compare them without having to rely on years-old memories.

Pepe’s is the original. In my previous visits, I’d ordered what I usually order: a tomato-and-cheese pizza with sausage and mushrooms. It was good, but not as good as Modern’s. But my son convinced me that I was doing Pepe’s wrong, because the true Pepe’s experience is the white clam pizza. Well, I like clams and I like pizza, so even though I wasn’t crazy about the idea of putting the two together, it seemed like a reasonable proposition.

I started off with a Caesar salad that would have been quite good if it hadn’t been practically floating in dressing. There were two choices of red wine; I ordered the Chianti, which was more than serviceable, and waited for my pizza. I have to say that I was somewhat disappointed. The thin New Haven-style crust only had a little bit of cheese on it, which I’m guessing is the way it was supposed to be. It was as crispy as it was chewy. On top was a generous helping of minced clams and garlic.

I’m sure there are plenty of people who would have raved about it, but I was less than impressed. At least I can now say that I’ve had Pepe’s signature dish. But if I ever go back, I’ll order something else. 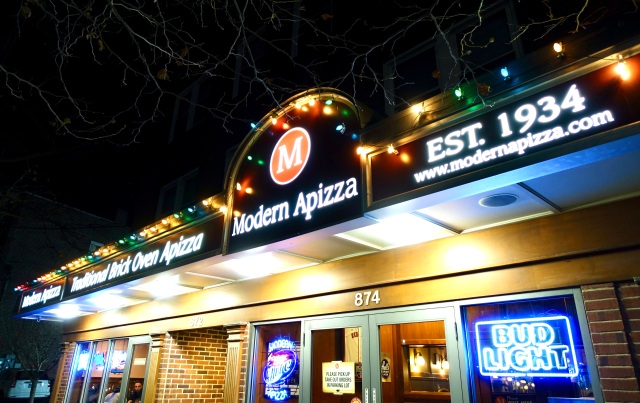 Just the very act of stepping into Modern Apizza was thrilling. I hadn’t been there in about seven years, and the anticipation was almost more than I could bear. Modern has a more expansive wine list than Pepe’s or Sally’s. I ordered a glass of Merlot. My waitress convinced me that the Caesar salad was enough for at least two people, so I ordered a garden salad that was drowning in Italian dressing. Not great.

But then the pizza arrived — a perfect combination of tomato sauce (not too much), a blend of cheeses, ground sausage and lots of mushrooms. It was pizza perfection, and it brought me back to my first visit about 10 years ago, when I sat outside on a hot July night. Recently I watched the documentary “Pizza, A Love Story,” and learned that non-natives tend to gravitate to Modern because they use more cheese than Pepe’s or Sally’s. That seems right to me.

That’s not the only way that Modern, which is close to the downtown, does things a little differently from its Wooster Square competitors. Pepe’s and Sally’s use coal-fired ovens; Modern uses oil. I don’t know that it makes any difference. All three make magnificent pizzas, thin, charred on the bottom, and unlike anything available elsewhere.

A lot of people will tell you that New Haven pizza is the best in the world. I don’t know about that. It is amazingly good. But we have wonderful pizza in Medford and environs as well; it’s just different. Sadly, I have no reason to go back to New Haven anytime soon. But when I do, I’ll head straight for Modern Apizza.

5 thoughts on “New Haven apizza is a world apart. But which legendary restaurant is the best?”