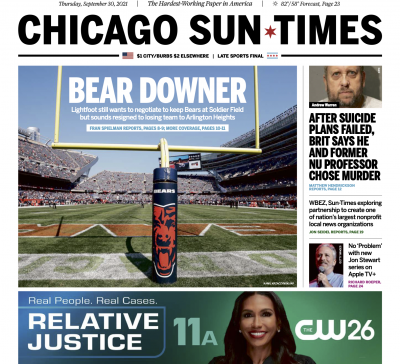 It looks like Chicago’s number-two newspaper is about to get a huge boost. Given that the dominant daily, the Chicago Tribune, is being gutted by its new hedge-fund owner, the move can’t come soon enough.

According to media writer Rob Feder, the Chicago Sun-Times and public radio station WBEZ are seeking to merge their operations. The Sun-Times, a tabloid that bills itself as “The Hardest-Working Paper in America,” has long labored in the shadow of the Tribune. But with the Tribune now controlled by Alden Global Capital, the Sun-Times/WBEZ combination could quickly emerge as the news source of record in our third-largest city.

Sun-Times reporter Jon Seidel writes that the newspaper would become a subsidiary of Chicago Public Media. What’s unclear — and maybe those taking part in the talks haven’t figured it out themselves yet — is whether the Sun-Times would become a nonprofit or if it would remain a for-profit entity owned by a nonprofit. It matters for a variety of reasons, not least of which is that nonprofits are not allowed to endorse political candidates.

Become a member of Media Nation for just $5 a month!

I couldn’t immediately find any numbers on how big the two entities’ reporting staffs are. But it’s significant that there would reportedly be no job reductions if the two operations are combined. WBEZ is one of public radio’s powerhouses, and the Sun-Times has maintained decent paid circulation — nearly 107,000 on Sundays and almost 100,000 on weekdays, most of it print, according to numbers it filed with the Alliance for Audited Media a year and a half ago. (The Tribune clocked in at 527,000 on Sundays and 256,000 on weekdays.)

According to a news release quoted by the Sun-Times, the combined outlet “would invest in journalism through expanded capacity to better serve Chicago; expand and engage with diverse audiences throughout the region, and expand digital capabilities to deliver a compelling digital experience across platforms and reach audiences where they are.”

Public radio can play a vitally important role in keeping regional news coverage alive in markets where legacy newspapers are shrinking. In Denver, for instance, Colorado Public Radio, combined with Denverite, which it acquired several years ago, now has what is likely the largest newsroom in the state — about 65 staff members, according to executive editor Kevin Dale. The Denver Post, cut drastically under Alden ownership, employs about 60 journalists, and The Colorado Sun, a well-regarded digital start-up, has 22, according to editor Larry Ryckman.

In Boston, public radio stations WBUR and GBH have probably the most robust news operations in the region after The Boston Globe. Unlike the Tribune, the Globe is independently owned and growing. But if that were to change, the public radio stations would be well-positioned to fill in the gap.

The WBEZ/Sun-Times announcement is the best journalism news to come out of Chicago since Alden acquired the Tribune earlier this year. Let’s hope it becomes a model for what might take place elsewhere.