Journalism about human rights is both important and dangerous. That was the message at the K. George and Carolann S. Najarian Lecture on Human Rights at Faneuil Hall, endowed by the Armenian Heritage Foundation and held Thursday night.

To see a Storify of live tweets about the event, please click here. 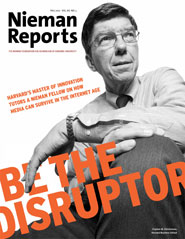 Harvard Business School professor Clayton Christensen has an important article in The Boston Globe today on the disruptive changes coming to higher education, arguing that the fading away of MOOCs (massive online open courses) will amount to nothing more than a temporary reprieve for the old way of doing things.

Ultimately, Christensen and his co-author Michelle Weise argue, college and university administrators will have to deal with “disruptive innovations” coming from the outside as they find that their high and increasing costs are unsustainable.

But what I find at least as interesting as Christensen’s views on education is connecting the dots between him and the Globe. Consider:

Given that context, Christensen’s appearance in today’s Globe would appear to be a side effect of the “jobs to be done” thinking that has already permeated John Henry’s news organization.

The Washington Post faced a lot of questions after Ezra Klein packed up and took his talents to Vox Media. Were Jeff Bezos and company making a Politico-level mistake in not finding a way to keep Klein, the founder of Wonkblog, under its own roof? Or was Klein making unreasonable demands — reportedly a $10 million investment for a much bigger staff?

My own view is that the two sides should have found a way to keep Klein loosely affiliated with the Post, although I have no way of knowing whether that was a realistic option.

In any event, I’m burying the lede. On Wednesday the Post went a long way toward answering those questions by announcing a significant investment in its news operations. Wonkblog will continue. And according to a memo to the staff from executive editor Marty Baron, a considerable amount of hiring and expansion is under way, including more blogs, a breaking-news desk and an expanded Sunday magazine.

“With these initiatives, we can all look forward to a future of great promise,” Baron wrote. (Thanks to Jim Romenesko, who also links to a Washingtonian story in which Post publisher Katharine Weymouth offers further insight into Klein’s departure.)

In an interview with Ravi Somaiya of The New York Times, Baron says of Bezos: “He hasn’t been passive. He’s heavily engaged, keenly interested in what our ideas are. He offered his own thoughts and expressed a willingness to invest.”

These are very good signs at a time when the news about the news is more favorable than anything we’ve heard in years (Patch’s latest near-death experience notwithstanding). Whether such optimism is warranted will be the media story of 2014 and beyond.

Photo is a screen grab from an appearance then-Boston Globe editor Baron made on WGBH-TV’s “Greater Boston with Emily Rooney” in 2009. 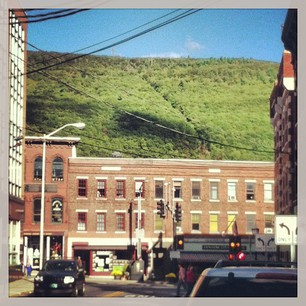 The problem with getting all worked up over the IRS scandal is that we don’t have any outrage left over for the stories that really matter.

Tonight we learn that President Obama’s Justice Department “secretly obtained two months of telephone records of reporters and editors for The Associated Press in what the news cooperative’s top executive called a ‘massive and unprecedented intrusion’ into how news organizations gather the news.”

And here’s some context: a piece I wrote for the Huffington Post in February 2012 headlined “Obama’s War on Journalism.”

This is the one to watch.

Update: This, by Northeastern’s Matt Collette, is much better than my tweets.

Shelley Murphy has been chasing the notorious gangster James “Whitey” Bulger since she was a young reporter at the Boston Herald. Now a Boston Globe reporter, she and Globe columnist Kevin Cullen are the authors of a new book, “Whitey Bulger: America’s Most Wanted Gangster and the Manhunt That Brought Him to Justice” (Norton).

Murphy, who graduated from Northeastern one year after I did (I won’t say when), spoke on campus today before a packed room in Snell Library. She shared some great stories — some funny, some harrowing. I live-tweeted the event, and offer some of what she said below.

Getting ready to hear from #Northeastern alum Shelley Murphy, who’ll talk about the Whitey Bulger book she co-write with Kevin Cullen.

Shelley Murphy says Whitey Bulger has nothing to do in jail but write. And he spends much of his time writing. #Northeastern

Alcatraz had a vast library, and Whitey used it to educate himself while a prisoner there. #Northeastern

Shelley Murphy: FBI failed to understand that, in Boston, Irish mob was as dangerous as Italian Mafia. #Northeastern

Shelley Murphy: Whitey sees himself as the victim — a gangster with “scruples” done in by FBI. #Northeastern

Why did Whitey stop killing after 1985? He had heart trouble and was told to simplify his life. #Northeastern

In 1979 every member of Winter Hill gang went to prison except Whitey and Steve Flemmi, both FBI informants. #Northeastern

People brought information about Whitey to FBI. Agency would leak it to Whitey and they’d be killed. #Northeastern

People in Southie were terrified of Whitey — brother of Senate president, rumors of FBI protection. #Northeastern

In a letter to a friend, Whitey called Shelley Murphy a name that rhymes with “bore.” #Northeastern

No one dared call him Whitey back in the day. Now he’s embraced his nickname and celebrity, says Shelley Murphy. #Northeastern

Shelley Murphy: “I was stunned” that Whitey had lived in same Santa Monica apartment for 16 years #Northeastern

Former Miss Iceland got to know Whitey because she and Cathy Greig bonded over love of animals. #Northeastern

Whitey thought Shelley Murphy was a “traitor” because she went to South Boston High School. #Northeastern

Shelley Murphy’s father served with Steve Flemmi during Korean War. She had some concerns about security. #Northeastern

Shelley Murphy: Whitey knows he’s not getting out of prison, but insists he didn’t kill two women. #Northeastern 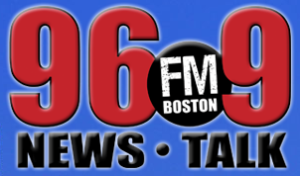 The Boston Herald reports today that Greater Media could be preparing to get rid of the talk format at WTKK Radio (96.9 FM) because toxic hosts like Michael Graham are increasingly repellant to advertisers.

The story, by Ira Kantor, has some resonance because rumors of the move have surfaced off and on for many months. An interesting new wrinkle Kantor found is that someone has registered music-related domain names like 969bostonsbeat.com and 969thebeat.com in preparation for a switch. When I looked them up I discovered that whoever put in for them had paid a little extra for privacy protection. There’s no way of knowing whether they were registered by Greater Media or an entrepreneurial squatter, but the fact that they were only registered last week is surely indicative of something.

I am firmly convinced [Greater Media] will make things work for them and find a way to keep it around, but have a Plan B in the event they need to turn on a dime and have something that will attract a younger audience, because right now it’s not talk radio.

WTKK has had a schizophrenic format for quite a while. Its morning drive-time hosts, Jim Braude and Margery Eagan, are civilized and funny. Braude is a liberal and Eagan is — well, sort of liberal, sort of moderate. But whenever I tune in, they seem to be talking about something other than politics.

The afternoon drive host, meanwhile, is Graham, a right-wing bully who replaced the even more noxious Jay Severin a couple of years ago.

If Greater Media brings the hammer down on talk, I’d like to see Braude and Eagan land somewhere. In the current radio market, though — shrinking, moving online, with those that are still on the air embracing cheap robo-programming — it’s hard to imagine where.

A lot of great tributes today to Red Sox legend Johnny Pesky, who died on Monday at the age of 92. I want to call your attention to one you might not otherwise see, written by Steve Krause of Lynn’s Daily Evening Item, Pesky’s hometown paper.

Krause, a fellow Northeastern News alumnus from the 1970s, is an old pro who probably knew Pesky as well as anyone in the sporting press. Krause doesn’t indulge himself, as he sticks to the facts. But the obit he’s written is suffused with his deep knowledge of Pesky’s life and career.

My own memories of Pesky go back to the late 1960s and early ’70s, when he joined Ken Coleman and Ned Martin in the broadcast booth. I can still hear him saying, “You’re absolutely right, Ken,” and referring to any and every member of the Red Sox as “a fine young man.” That latter appellation was particularly amusing when he used it to defend a player who’d been accused of drunkenly groping a flight attendant.

I will never be able to track this down, but I also remember an interview Pesky once gave about his new life as a broadcaster. When asked what the hardest adjustment was, he replied, matter-of-factly, that it was making sure he didn’t drop any F-bombs or other profanity on the air.

Indeed, let’s not forget Pesky’s famous “Leskanic, you son of a bitch!” moment — which I had forgotten until Mike Miliard reminded me of it.

And yes, I recommend David Halberstam’s book “The Teammates: A Portrait of a Friendship,” about Pesky, Ted Williams, Dominic DiMaggio and Bobby Doerr, Red Sox teammates in the 1940s who remained close until their deaths. When I read it a few years ago, only Williams had died. Now Doerr is the only one left.

Taken just before noon on Friday.

Thank you for reading, for commenting and for your occasional story tips. And best wishes to everyone in Media Nation and beyond.