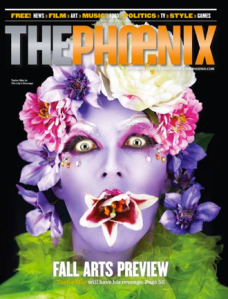 Joe Kahn wrote a smart piece on the future of the Boston Phoenix — ahem, The Phoenix — in Tuesday’s Boston Globe.

As you may know, the current issue of the Phoenix, lowercase the, is the last as a newspaper. This week, The Phoenix will debut as a free weekly glossy magazine, combining news and arts coverage from the Phoenix with some lifestyle content from Stuff, a magazine that will cease to exist as a standalone. And if you’re worried about The Phoenix’s straying from its alternative roots, keep in mind that the Phoenix had lots of lifestyle content in the 1990s. I look at this as a recalibration more than a complete reinvention.

The unusual aspect to this story, and one we Bostonians take for granted, is that the founder, Stephen Mindich, is still at it, and in fact has taken charge of the new publication. In an era of corporate chain media, The Phoenix, at 46, is still proudly independent. Mindich recently talked about his long career with Emily Rooney of “Greater Boston.”

The story of the Boston Phoenix, as with other alternative weeklies, is that it was heavily dependent on classified ads — not just the personals, but everything from a band needing a bass player to a student looking for a roommate. Needless to say, nearly all of those ads have moved to Craigslist.

And at a time when many newspapers, including the Globe, are asking their readers to pick up an increasing share of the costs through home delivery and digital subscriptions, The Phoenix is free both in print and online.

It’s a tough model for the Internet age, but glossy should enable The Phoenix to attract some of the high-end advertising it needs in order to thrive. In that spirit, I think former Phoenix contributor Mark Leccese, now a journalism professor at Emerson College and a blogger for Boston.com, was too pessimistic in his own recent assessment.

I’ve got my collector’s item from last week, and I’m looking forward to grabbing a copy of the new magazine as soon as I can. As most of you know, I was the Boston Phoenix’s media columnist from 1994 to 2005, and I still contribute occasionally.

I wish all the best to Mindich, executive editor Peter Kadzis, editor Carly Carioli and all my friends who are still there. See you tonight.

3 thoughts on “The Phoenix gets ready for its close-up”