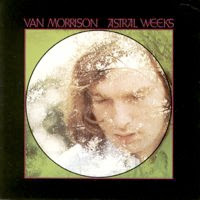 I was excited about the new live version of Van Morrison’s “Astral Weeks” until I saw this video of him mumbling through “Sweet Thing” at the Hollywood Bowl. The huge band he’s assembled is terrific. Morrison, not so much. Nor does this New York Times review hold out much hope.

Though I’m not a big Morrison fan and have never seen him live, I love “Astral Weeks.” As I suspect is the case with many people, I came to it well into adulthood — it was never on the radio, either then or now, and Morrison’s numerous top-40 hits didn’t appeal to me all that much. When I finally decided to find out why critics had been raving about it for all those years, I was mesmerized.

Last Friday I listened to it straight through while driving home, the first time I’d done that in a while. What a strange, wonderful piece of work. Morrison is at his peak, both in his singing and his writing. Is it possible that he was just 23 when he recorded it? I’d listen to it just for Richard Davis’ otherworldly bass-playing. Pressed to name a favorite song (not that these are really songs), I’d probably say “Cypress Avenue.” But that’s subject to change.

Trouble is, Morrison has had a reputation for years — maybe decades? — of indifference when it comes to performing live. Don Imus scored a rare interview with Morrison last week, but didn’t succeed in drawing him out of his shell. Far better is this NPR piece, broadcast on Saturday, on the significance of “Astral Weeks.”

Bob Dylan is often lumped with Morrison in delivering uninspired, even belligerently awful live performances. But when Dylan’s engaged, he is as compelling as he’s ever been. If you don’t believe me, check out this riveting video of Bob and the boys performing the Sam Cooke classic “A Change Is Gonna Come.” (Steve Greenlee will have to take my word for it, I guess.)

Does Morrison ever rise to such heights anymore? I don’t know the answer to that. What I do know is that if you don’t have “Astral Weeks” in your collection, you should rectify that as quickly as possible. You will be entranced and amazed.

15 thoughts on “The wonderfulness of “Astral Weeks””