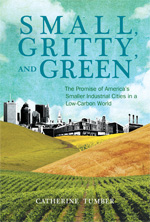 There’s nothing quite listening in on a smart conversation by two old friends. In this week’s Boston Phoenix, Catherine Tumber talks with Jon Garelick about her new book, “Small, Gritty and Green: The Promise of America’s Smaller Industrial Cities in a Low-Carbon World.”

Cathy’s big idea is that down-on-their-luck cities like Lowell and Springfield may be due for a revival as economic and environmental constraints make urban living more appealing. And unlike major metropolises such as New York or Los Angeles — or Boston, for that matter — small cities have the capacity to develop their own self-sufficient ecosystems, including locally grown food.

The book is based on an essay Tumber wrote for the Boston Review in 2009 titled “Small, Green and Good.”

I read “Small, Gritty and Green” in galleys last spring, and I recommend it highly. Cathy also has given me invaluable advice for my own book-in-progress on the New Haven Independent and other community news sites, tentatively titled “The Wired City.”

The Boston Phoenix has announced more changes to the top of its masthead, as associate arts editor Jon Garelick has been named arts editor, and arts editor Jeffrey Gantz will become managing editor for arts.

The titles are more than semantic, according to an internal memo from new editor Carly Carioli. Jon will be in charge of the paper’s arts coverage, while Jeffrey’s role — a three-month assignment — will consist of easing the transition.

I had the privilege of working with both Jeffrey and Jon during my years at the Phoenix. In fact, Jeffrey was one of several people responsible for hiring me in 1991, as it was he who determined I had performed somewhat less miserably on the Phoenix’s notorious copy-editing test than other candidates.

In addition to being an admirably meticulous copy editor, Jeffrey was an expert on an eclectic variety of subjects that caught his interest — from soccer (I still remember my son, Tim, kicking a ball around with him at a company picnic on Georges Island), to espresso, to which varieties of cheese should be uppercased and which ones lowercased.

Jon, like Jeffrey, is a journalist with a daunting intellect. He has a deep background in music, especially jazz, and is highly regarded in the local arts community. He is also married to well-known local writer Clea Simon.

Jon is originally from Woonsocket, where I spent a couple of years as a student-reporter for the Woonsocket Call in the mid-1970s. Jon, a keen observer of his surroundings, once provided me with a hilarious example of the fractured syntax used by many old-time residents, who speak English that is heavily inflected with the French they learned growing up in Quebec: “Please throw me down the stairs my keys.”

Carly, in his memo, referred to Jeffrey as “a tireless editor, critic, protector of style, and keeper of institutional wisdom,” and to Jon as “a fantastic judge and incubator of raw writing talent.” Best of luck to both of them.