In what I’m sure will be a surprise to no one, Greater Media has announced that WTKK Radio (96.9 FM) talk-show host Jay Severin has been fired. Boston Globe story here; Boston Herald story here.

Severin was suspended last week, apparently for making some pretty loathsome remarks about sex with interns. Standard fare for the hatemongering Severin, but his $1 million salary and his plummeting ratings made getting rid of him an easy call.

Meanwhile, Globe columnist Scot Lehigh proves that Severin lied about him recently regarding Lehigh’s reporting that Severin had lied about having received a Pulitzer. Fun piece (“lying about lying,” Lehigh calls it), though the only folks who thought Severin was telling the truth about Lehigh were the most hopeless of his sycophants. Which means they won’t be convinced now, either.

Severin has already been scrubbed from the WTKK website. Jay who? We don’t know anyone named Jay.

Was Media Nation the first to predict that Severin wouldn’t be back? You tell me.

And just think: Severin’s departure comes on the same day that we learn fading Fox phenom Glenn Beck will be leaving his daily show later this year. Beck is supposedly going to work on unspecified projects for Fox.

The Boston Herald’s Jessica Heslam reports that WXKS (AM 1200) — the home of Rush Limbaugh and Glenn Beck — is tanking, and that it shows Boston may be a lousy market for right-wing radio.

She’s right, but the Clear Channel-owned ‘XKS is hardly proof, given its less-than-clear signal. The real story is farther down in her piece, where we learn that the city’s two major talk-radio stations, WTKK (96.9 FM) and WRKO (AM 680), are performing poorly as well. Both ‘TKK and ‘RKO are mostly right-wing.

Heslam makes no mention of it, but I’m sure the ratings for Boston’s one liberal talk station, WWZN (AM 1510), are minuscule, given its poor signal.

Fact is, talk radio was once a phenomenon, but now it’s grown stale. The only show on the commercial dial that sounds even remotely like talk radio in its Boston heyday is Dan Rea’s, on WBZ (AM 1030). Rea’s a journalist who knows how to ask questions, and he hosts a guest-heavy, non-shouting program that doesn’t grate.

That’s not to say there aren’t talk-show hosts in Boston who are doing a pretty good job. I’d cite Jim Braude and Margery Eagan on ‘TKK and Charley Manning on ‘RKO. But the glory days of Boston talk radio are over. 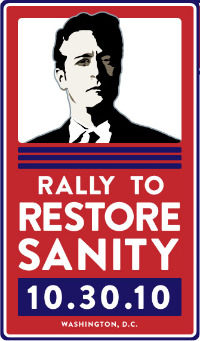 What does it mean to “participate” in a rally? It’s a question I’m asking myself after reading a memo from NPR management (via Romenesko) warning journalists to stay away from the Oct. 30 rallies being organized by Jon Stewart and Stephen Colbert. The memo, from senior vice president for news Ellen Weiss, includes this:

NPR journalists may not participate in marches and rallies involving causes or issues that NPR covers, nor should they sign petitions or otherwise lend their name to such causes, or contribute money to them. This restriction applies to the upcoming John [sic] Stewart and Stephen Colbert rallies.

Most of Weiss’ admonitions are a matter of common sense. Journalists should not put bumper stickers on their cars, donate money to political candidates or do anything else that would amount to political involvement. But if I were an off-duty NPR reporter, I’d be offended at being ordered not to attend a rally, whether it be Colbert’s “Keep Fear Alive” event or Glenn Beck’s recent gathering.

Good journalists want to check things out whether they’re working or not. There’s a proper role for a reporter on a busman’s holiday, and it neither requires staying home nor involves waving fists and posters while chanting along with the crowd.

In my latest for the Guardian, I interview a community activist from New Haven who was recently smeared by Glenn Beck and other cogs in the right-wing noise machine.

It strikes me as overly cynical whenever I hear someone argue that Glenn Beck’s just an entertainer who doesn’t mean half the things he says. I find it hard to believe anyone could spew that much toxic rhetoric just for laughs (and money).

Now the Boston Phoenix’s Adam Reilly has advanced an alternative explanation, based on some pretty extensive research. According to Reilly, what animates Beck may be an out-there, retro strain of Mormonism he has embraced with a convert’s zeal.

And when Beck says the Constitution is “hanging by a thread,” he’s not just indulging in a cliché — he’s invoking the very specific language of a particular type of religious paranoia.

Reilly’s piece is well worth your time.

In my latest for the Guardian, I take a look at the fall of Van Jones — and at how a far-right Web site and Glenn Beck, improbably enough, took him down with a clean hit.

In my latest for the Guardian, I cheer on corporations like Wal-Mart and Verizon Wireless, who may succeed in doing what Rupert Murdoch and Roger Ailes won’t: force Glenn Beck and his hateful lies off the air.

More: Jeremy Hobson of “Marketplace” interviewed me for a piece on the Beck boycott.