The Boston Globe has been notably favorable toward charter schools both on its opinion pages and in its news coverage. But if you oppose Question 2, a referendum that would expand the number of charter schools in Massachusetts (as I do), then you’ve got to like two pieces in today’s Globe.

First, a story by David Scharfenberg on a study by the Massachusetts Taxpayers Foundation that claims to show charter schools aren’t draining money from regular public schools notes in the second paragraph that the study was paid for by a pro-charter-school organization:

Interestingly, the original version of Scharfenberg’s story, posted online Wednesday, made no mention of the funding. Whatever the reason, I’m glad that he and/or his editors decided to add that important context later on. And by the way: the study actually shows that, in some communities, the financial bite caused by charter schools is pretty serious.

Second, Joan Vennochi observes in her opinion column that Sen. Elizabeth Warren’s opposition to the ballot question is likely to be a big deal. Toward the end, Vennochi writes:

I don’t like union resistance to needed reform. But I also dislike charter advocates’ portrayal of union-backed teachers as universally lazy and inept. Of course, parents naturally want the best education for their children and they should be able to choose what that means. But the creation of a two-tiered system betrays the very mission of public education [emphasis added].

That really goes to the heart of the matter. Because the political will doesn’t exist to create great public schools for everyone, charter-school proponents want to create them for a few. It’s just unacceptable.

Disclosure: My wife is a public school teacher and a union member in a community unlikely to be affected if Question 2 is approved.

The Massachusetts Legislature did something Tuesday night to make it more difficult for tax money to be used to help pay for the Boston 2024 Olympics bid. But it’s not entirely clear exactly what — or how important it is.

Matt Stout in the Boston Herald quotes unnamed “lawmakers” as saying that the final budget deal produced by House and Senate negotiators “includes language preventing the use of state funds or tax expenditures for the 2024 Olympics.” His lede describes it as a “ban.”

But Andy Metzger of State House News Service offers a somewhat different spin, writing, “The budget … requires passage of a special act of the Legislature before any public funds can be spent to benefit the proposed 2024 Boston Olympics.” Maybe that amounts to the same thing, though it’s not clear.

The budget contains a provision requiring that any expenditure of tax dollars for hosting the Olympics in 2024 must first be approved by the Legislature after public hearings. The budget, of course, remains in effect for  one year, through the end of June 2016.

Of course, one legislature’s actions are not binding on the next, and it seems pretty unlikely that the Boston 2024 folks are going to ask for public funds anytime in the next year. Which may explain why The Boston Globe’s budget story, by David Scharfenberg and Joshua Miller, makes no mention of it at all.

It strikes me that the measure was worth a mention, even if it’s largely symbolic. The implications of budget deals often become clearer in the days after they are reached. I hope we find out more about what actually happened Tuesday night. 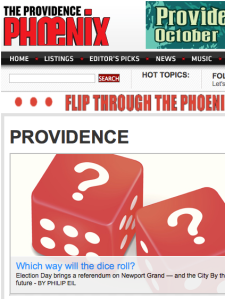 As you may have already heard, The Providence Phoenix is shutting down, about a year and a half after The Boston Phoenix closed its doors. Ted Nesi of WPRI covers it here. Awful news, but not entirely unexpected. As recently as a few months ago, I was hearing that The Portland Phoenix of Maine was doing well but that Providence was lagging financially.

What happened? It’s hard to say. But Portland is a smallish city, insular and self-contained — the sort of place where alt-weeklies seem to be surviving. An example: Seven Days of Burlington, Vermont, which appears to be thriving. Providence, by contrast, is a fairly large city within the orbit of Greater Boston.

The demise of The Providence Phoenix would be bad enough on its own. What makes it even worse is that the Providence Journal is in the midst of downsizing following its sale to a company affiliated with the GateHouse Media chain. There is a real gap in Providence, and it’s not immediately clear what will fill it. Perhaps Rhode Island Public Radio can beef up its online local coverage. Maybe the online-only news site GoLocalProv will rise to the challenge. Or something new might come along.

The Providence Phoenix has produced some fine journalists over the years, including Ian Donnis of RIPR and David Scharfenberg of The Boston Globe. And best wishes to editor Lou Papineau, a veteran who started at the paper back when it was known as the NewPaper, and news editor Phil Eil, a more recent hire.

Best wishes, too, to publisher Stephen Mindich, who kept the Boston and Providence papers alive for as long as he could. I hope the future is brighter for The Portland Phoenix — now the only remaining alt-weekly in what was once a vibrant regional chain.

And yes, I plan to rant about this later today on WGBH’s “Beat the Press.”

(Note: I was a staff writer and editor for The Boston Phoenix from 1991 to 2005, and last wrote for the Providence and Portland papers this past July.)

*Correction: The headline originally gave the incorrect year for the founding of The Providence Phoenix, which began life as The NewPaper. As founder Ty Davis writes in the farewell issue, he began the paper during the Blizzard of 1978.