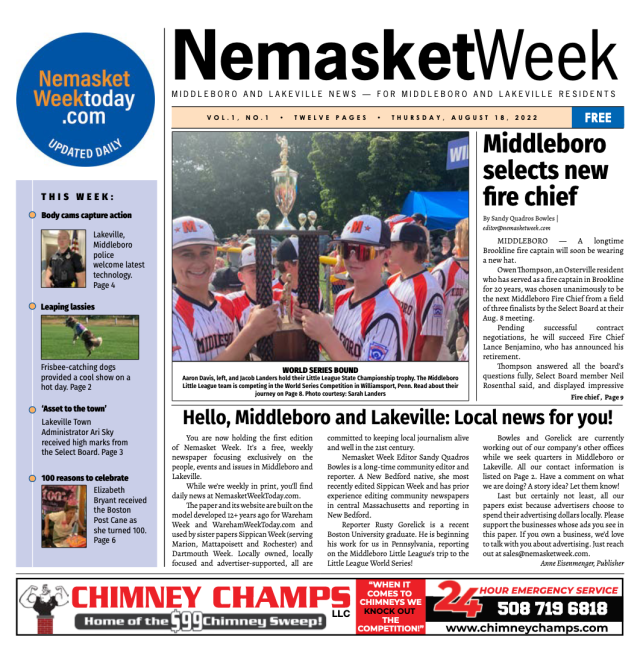 Independent local news startups are breaking out everywhere, so forgive me if I pay a little extra attention to today’s debut of Nemasket Week, a free, advertiser-supported print newspaper and website. The paper covers my hometown of Middleborough as well as neighboring Lakeville, and is the first news outlet those communities have had since Gannett killed off the Middleboro Gazette last year.

The first issue of Nemasket Week comprises 12 pages and has several local ads. It also has news — the naming of a new fire chief on page one, a feature on a performance by the High Flying Dogs, the select board’s evaluation of the town administrator, the adoption of body cams by the police departments in both communities, and (gasp) the closure of the Peaceful Meadows ice cream stand. A number of community announcements and an obituary round things out.

And get this — they actually sent a reporter to Williamsport, Pennsylvania, to cover Middleborough’s appearance in the Little League World Series. The opening loss came too late to make it into the print edition, but there’s a detailed story online.

Sadly, the paper has embraced the “Middleboro” spelling instead of the correct and proper “Middleborough.” But that’s an ancient debate, and the Middleboro Gazette used the shorter name even back when it was an independently owned paper.

This is an impressive debut. Congratulations to publisher Anne Eisenmenger for adding to what was already an impressive regional presence comprising Wareham, Dartmouth and the Sippican communities of Rochester, Mattapoisett and Marion.

2 thoughts on “Life after Gannett: Nemasket Week debuts in Middleborough and Lakeville”