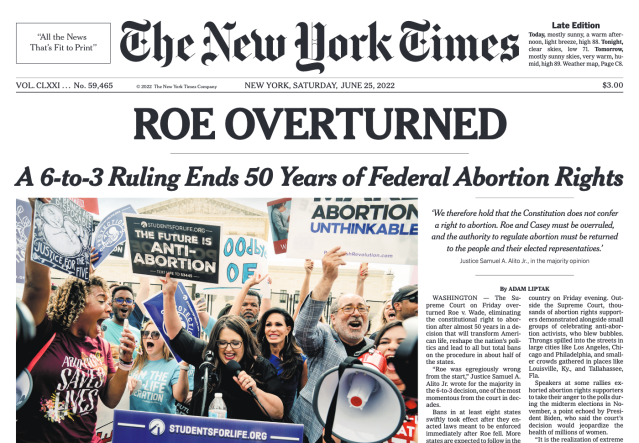 The U.S. Supreme Court’s decision to overturn Roe v. Wade is so huge and terrible that it’s difficult to get our arms around it. So let me just look at a small chunk of it — the deeply undemocratic nature of our electoral system. You can find various polls with differently worded questions, but, in general, the public was firmly in favor of retaining Roe before Thursday’s decision. So how did we get here?

I’ve written about this before, but it’s worth repeating. A healthy modern democracy is based on the will of the majority, with protections in place for the minority. That’s why we have the Bill of Rights. Unfortunately, we now have a situation where a minority of voters is so super-empowered that how the majority votes almost doesn’t matter. Consider:

If something can’t go on forever, then it won’t. More than half the country isn’t going to put up with being permanently disempowered. I don’t know how we get from here to there, and make the changes we need to our outmoded 18th-century Constitution, but I’m confident that we will. Change looks impossible — then, suddenly, everything changes all at once.