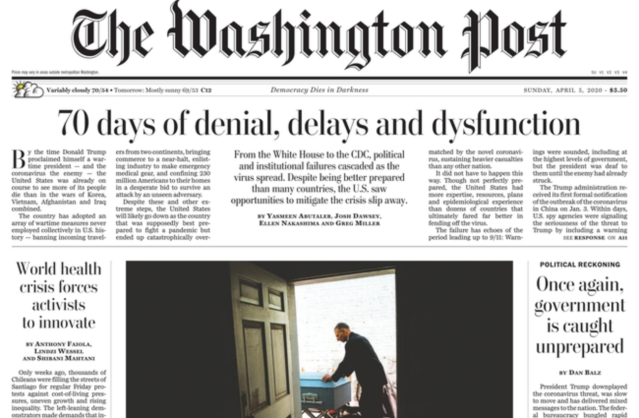 The Washington Post has weighed in with a shocking story on the Trump administration’s dereliction of duty in responding to the COVID-19 pandemic — a looming catastrophe that should have become our top priority starting in the early days of January, but which President Trump continued to downplay right into early March.

The focus is on the White House’s miserable response, as it should be. But I was also struck by the roadblocks put up by the Chinese government and by the incompetence of the Centers for Disease Control and Prevention.

Also: The Post gives some credit to Trump for clamping down on travel from China early on. Yet as we learn today in The New York Times, government officials managed to botch that as well.

It is mind-boggling to think about how much worse the pandemic is going to be because of Trump’s malfeasance, misfeasance and nonfeasance.

Please consider becoming a subscriber to Media Nation. The cost is just $5 a month, and you’ll receive an exclusive weekly newsletter with additional content. Just click here to sign up via Patreon.