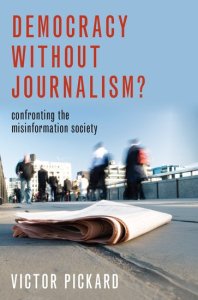 It’s hard to imagine better timing for a book about the future of news.

In “Democracy without Journalism? Confronting the Misinformation Society” (Oxford University Press), Victor Pickard calls for vastly increased funding for public-interest reporting and public media, newsrooms that are run democratically by journalists and members of the community, and breaking up or strictly regulating monopolies such as Google and Facebook.

Back in those golden days of, say, early March, Pickard’s agenda would likely have been dismissed, at best, as intriguing but unrealistic and, at worst, as representing an unacceptable intrusion by government that would inevitably compromise journalism’s watchdog role.

But then came the instant recession caused by COVID-19 and, with it, alarmed calls for federal action to save journalism — especially local journalism, already in extremis. Among those demanding action: Washington Post columnist Margaret Sullivan; Craig Aaron, the co-CEO of the media-reform organization Free Press; and Steven Waldman and Charles Sennott, the co-founders of Report for America.

How bad is it? The news-business analyst Ken Doctor, writing at the Nieman Journalism Lab, reports that readership of newspaper websites is exploding — yet advertising is plummeting so quickly that losses are piling up. Every day, it seems, comes news of more papers eliminating print editions, cutting wages and laying off reporters. Which is actually the ideal set of circumstances for Pickard to make his argument that the contradictions of for-profit media have reached something of an endpoint. As an alternative, he proposes what he calls a “social democratic” model for journalism.

An associate professor of communication at the University of Pennsylvania’s Annenberg School, Pickard is a protégé of Robert McChesney and a former fellow at the aforementioned Free Press and the New America Foundation. The case he puts forth is that not only should government play a much bigger role in ensuring the health of journalism, but that the extreme market libertarianism that rules the media today is a relatively new phenomenon.

As Paul Starr (in “The Creation of the Media,” 2004) and others have before him, Pickard observes that the American press got an enormous boost starting in Colonial times by way of generous postal subsidies — a benefit that lasted until several decades ago, when market fundamentalists began demanding that the Postal Service cover its expenses.

Moreover, various regulatory efforts aimed at reducing commercialism in radio and television bore little fruit. By the late 1940s, Pickard says, they had pretty much run their course, and some of the forward-looking leaders of that era were pushed out of public service during the McCarthy-era crusade against progressives and reformers. “The alarm bells quieted, plans for bold reforms receded, and the status quo quietly but assuredly reasserted itself,” Pickard writes. “Nevertheless, it is important to recall that none of this was inevitable; it could have gone quite differently.”

One theme that Pickard turns to repeatedly is the idea that “positive rights,” as he calls them, should be regarded as important as “negative rights” when thinking about media policy. What are negative rights? As Pickard describes them, they protect a media owner from government regulation, something that has come to be seen in many circles as guaranteed by the First Amendment.

But negative rights matter a great deal, as they involve First Amendment protections such as the freedom not to be censored, protection against abusive libel cases and the right not to have limits put on political speech, including the endorsement of candidates. Unfortunately, endorsements are already endangered given the increasing prominence of nonprofit news organizations, which are prohibited from boosting candidates as a condition of keeping their tax-exempt status.

By contrast, positive rights, in Pickard’s formulation, involve the public’s right to a diverse, democratic media. Here’s how he describes it: “True inclusion means that communities are not only receiving high-quality news, but are also deeply engaged in the news-making process itself. Community members should be involved in the governing process and empowered to organize their own newsrooms and collaborate in participatory journalism. Community engagement in the news-making process is the best way to create a new kind of journalism, one that is accountable and trustworthy.”

This sounds worthy, but I’m concerned about what it would look like in practice. A strong news organization is often the result of one person’s vision, or that of a small group of people. Opening things up to democratic governance runs the risk of lowest-common-denominator journalism in which some members of the community demand that certain stories be covered, or not covered, because of individual or group sensitivities.

That’s a potential hazard with cooperatively owned news organizations, an idea that Pickard supports. I’m currently tracking The Mendocino Voice, a digital news outlet that is transitioning to the co-op model. I’m interested to see if they can pull it off, and I wish them well. But a healthy news ecosystem requires different models — for-profit, nonprofit, co-ops, volunteer projects and the like. On several occasions Pickard suggests that we’ve hit the limit with regard to for-profits and even traditional nonprofits. I’m not willing to go that far.

Where I would agree wholeheartedly with Pickard is that our public media system is woefully underfunded. Not only does Pickard document the exponentially greater sums spent on public television and radio in virtually every other Western democracy, but he also comes up with the perfect anecdote to illustrate his point: he tells us the federal government’s annual contribution to PBS — about $445 million a year — is considerably less than the $626 million the Pentagon spends on its public-relations office.

A well-funded PBS and NPR, insulated from political pressure, Pickard says, could go a long way toward solving the local-news crisis by ramping up coverage of communities that have been abandoned by legacy newspapers.

“Transforming the U.S. media system into a democratic force,” Pickard writes in conclusion, “requires a robust policy program of regulating or breaking up information monopolies, creating public alternatives to commercial news media, and empowering media workers, consumers, and communities to engage with and create their own media.”

The journalism crisis has been with us for a decade and a half, and it’s only become more acute over time. The coronavirus pandemic underscores two realities: we need local news, and there may be no reliable way to pay for it through traditional market forces.

Pickard outlines one set of possible solutions. Policymakers would do well to consider his ideas — and to act before the news we need to govern ourselves becomes one more victim of the virus that is currently upending our way of life.