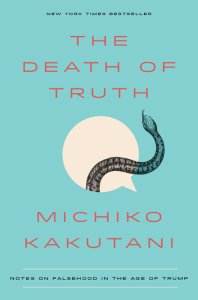 We are in the midst of a book-inspired frenzy over Donald Trump’s the cruelty and mendacity. The legendary journalist Bob Woodward’s latest, “Fear: Trump in the White House,” has renewed our anguished questions over how this petulant, foul-mouthed racist could be elected president.

But though Woodward has described the what and the how of the Trump presidency, we must look elsewhere for the why. Trump did not spring out of nowhere; we had been slouching in his direction for a long time. As former president Barack Obama put it the other day: “It did not start with Donald Trump. He is a symptom, not the cause.” But a symptom of what, exactly?

Attempting to give us some answers is Michiko Kakutani. Her new book, “The Death of Truth: Notes on Falsehood in the Age of Trump,” provides some much-needed context to help us understand what happened to our democracy. The tools wielded by Kakutani, the former weekday book critic for The New York Times, are deep reading and cultural criticism. The result is not entirely satisfying. But she does offer some provocative observations the about social changes that made Trump not just possible, but inevitable. She writes:

It is unlikely that a candidate who had already been exposed during the campaign for his history of lying and deceptive business practices would have gained such popular support were portions of the public not somehow blasé about truth telling and were there not more systemic problems with how people get their information and how they’ve come to think in increasingly partisan terms.

Some of Kakutani’s targets are familiar. The internet, she argues, is partly responsible for a rise in anti-intellectualism that manifests itself in contempt for expertise and an embrace of “the wisdom of the crowd.” In an online universe in which scientific knowledge is too often regarded as elitist, anti-vaxxers and climate-change deniers flourish in their ignorance.

Kakutani is also sharp in her observations about how the media have shifted from a few outlets speaking with authority to a myriad of competing voices catering to every conceivable ideology, with audiences increasingly trapped inside filter bubbles determined by algorithms that we don’t understand.

Oddly enough, Kakutani blames some of these cultural changes on postmodernism, an academic theory generally associated with the left. The essence of postmodernism, Kakutani explains, is that “there are no universal truths, only smaller personal truths — perceptions shaped by the cultural and social forces of one’s day.” This type of thinking, she argues, has since been adopted by the right. It certainly can be seen in President Trump’s use of the term “fake news” to describe journalism he doesn’t like, or in the toxic fiction that Fox News and Breitbart are simply conservative counterparts to the Times and The Washington Post. But it’s hard to draw a connection between an esoteric academic theory and the outrageous conspiracies promoted by the likes of Alex Jones.

The firehose of disturbing news that comes out of the Trump White House on a daily basis is overwhelming. Bob Woodward’s book was preceded by a similar if less credible book by Michael Wolff, “Fire and Fury.” Many of the details offered by Woodward, in turn, were almost immediately confirmed by an anonymous op-ed piece in the Times, written by a “high official” in the administration. The talk these days is of the 25th Amendment and “Crazytown,” of documents filched off Trump’s desk to prevent him from signing them and of obscenity-laced rants demanding that his generals assassinate adversaries like Syrian dictator Bashar al-Assad.

At such a chaotic moment, Kakutani’s broader perspective is invaluable. She opens with Hannah Arendt’s warning that totalitarianism arises not from committed ideologues but from “people for whom the distinction between fact and fiction … no longer exist.” And she closes with the late media scholar Neil Postman, who is rapidly becoming the Tocqueville of our era. Postman’s 1980s classic, “Amusing Ourselves to Death,” predicted much of what is unfolding today by examining the effect of television on the public discourse. Kakutani quotes Postman: “Our priests and presidents, our surgeons and lawyers, our educators and newscasters need worry less about satisfying the demands of their discipline than the demands of good showmanship.”