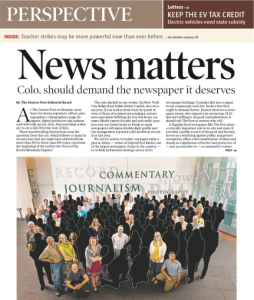 It was an unprecedented rebellion against the most notorious of the bottom-feeding newspaper chains. Over the weekend The Denver Post, gutted beyond recognition by Digital First Media, its hedge-fund-backed owner, published an editorial and a package of commentaries protesting endless rounds of cuts in the paper’s reporting staff. The editorial referred to the paper’s corporate overlords as “vulture capitalists” and said in part:

We call for action. Consider this editorial and this Sunday’s Perspective offerings a plea to Alden [Global Capital] — owner of Digital First Media, one of the largest newspaper chains in the country — to rethink its business strategy across all its newspaper holdings. Consider this also a signal to our community and civic leaders that they ought to demand better. Denver deserves a newspaper owner who supports its newsroom. If Alden isn’t willing to do good journalism here, it should sell The Post to owners who will.

Unfortunately, that doesn’t seem likely — at least not until Alden has squeezed every last penny out of the Post and the nationwide chain of newspapers it owns, ranging from The Mercury News of San Jose and the Orange County Register on the West Coast to, locally, the Boston Herald, The Sun of Lowell, and the Sentinel & Enterprise of Fitchburg.

As I’ve noted previously, Alden is controlled by an ultrawealthy financier named Randall Smith who, according to investigative reporting by Julie Reynolds in The Nation, plundered his newspapers in order to amass the $57 million he needed to purchase 16 mansions in Palm Beach, Florida. Digital First has also been accused of diverting hundreds of millions of dollars into investments managed by Alden, according to Reynolds.

The allegations against Digital First and Alden may be shocking, but they also underscore an important fact that casual observers often miss: there’s still plenty of money in newspapers, even though the business continues to shrink. Indeed, as the editorial in The Denver Post pointed out, Digital First was “solidly profitable” last year. Yet the Post’s newsroom has shrunk from more than 250 several years ago to fewer than 100 today — and will soon sink below 70.

Among those who contributed to the Post’s anti-Digital First package was Greg Moore, a former managing editor of The Boston Globe who worked as editor of the Post for 14 years, quitting two years ago rather than continuing to slash his reporting staff. “The Post cannot do its job starved of resources the way it is now,” Moore wrote. “Deep investigations can take months, running down news tips can take days, gathering and analyzing records can cost thousands of dollars, and getting the right photograph that tells a story better than words ever can takes patience. All of that is at stake with the relentless cutting taking place.”

Ironically (or perhaps not ironically), the Post on Friday published a preview of the baseball season in which it ran a six-column photo of Citizens Bank Park in Philadelphia instead Denver’s own Coors Field. Now, yes, it’s the sort of mistake that any 12-year-old baseball fan should have caught. But it’s also the sort of mistake that a demoralized, skeletal staff seemed almost destined to make. (The Post blamed it on a “production error.”)

So what can be done? Moore offered several suggestions: forming a public-private partnership, creating a foundation, or somehow persuading Digital First to spend a little more on journalism and a little less on Randall Smith’s mansions and speculative investments. The most promising of Moore’s ideas, though, is to find another buyer. If Smith and his hatchetman at Alden — Heath Freeman, likened to the fictional Wall Street villain Gordon Gekko in a recent Bloomberg View column by Joe Nocera — can be persuaded to sell now rather than wait for the last profits to trickle in, then perhaps journalism in Denver can be saved.

Just recently the Los Angeles Times, laid low by the corporate depredations of a chain known (seriously) as tronc, with a lowercase “t,” was purchased by a billionaire surgeon named Patrick Soon-Shiong. It’s too early to know what Soon-Shiong’s intentions are, but, if nothing else, he could give the Times a chance to grow again. Billionaire ownership has also benefited The Washington Post, which claims to be turning a profit under Amazon founder Jeff Bezos, and The Boston Globe, which is holding steady under financier and Red Sox principal owner John Henry.

Digital First’s initial reaction to the Denver uprising was more hands-off than one might have imagined. According to Sydney Ember of The New York Times, the company decided to let the commentary remain online and to go ahead with plans to include it in the Post’s print edition. The editorial-page editor, Chuck Plunkett, who conceived of the package, will remain on board.

But it remains to be seen whether what happened last weekend was the start of something big — or a futile gesture, quickly forgotten and not to be repeated as Digital First’s newspapers continue their long, not-so-slow slide to oblivion.