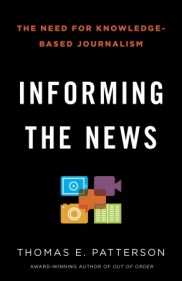 This review was previously published in The Huffington Post.

In the early 1990s the media identified an existential threat: violent crime. Sparked by high-profile cases such as the murder of a 12-year-old girl, Polly Klaas, and the fatal shooting of six passengers on a train in Long Island, news outlets from local television to Time magazine elevated criminal carnage above all other issues.

Such relentlessness brought results. By mid-1994, 40 percent of Americans were telling Gallup that crime was the country’s leading problem. Elected officials responded by passing laws mandating tougher prison sentences and by building new prisons. Within 10 years, the United States was locking up a higher proportion of its population than other country.

But there was something fundamentally wrong with all this. As Thomas E. Patterson describes it in his new book, “Informing the News: The Need for Knowledge-Based Journalism” (Vintage), violent crime was actually on the decline in the early ’90s — including a 4 percent drop from 1993 to ’94. Thus journalistic malpractice led to policy malpractice, with consequences we continue to live with today.

Patterson is a longtime journalism and media observer as well as the Bradlee Professor of Government and the Press at Harvard’s Shorenstein Center on Media, Politics and Public Policy. (Disclosure: He is also a friendly acquaintance.) The essence of his  argument is that it’s no longer enough (if it ever was) for journalists to describe what they learn from interviews and direct observation. They also need to know what’s true and what’s false, and to incorporate such knowledge into what they convey to the public.

“Today’s journalists,” Patterson writes, “use reporting tools that were developed more than a century ago and were better suited to the demands of that age than to those of today, where manufactured consent, clever fabrications, and pumped-up claims are everyday assaults on the public’s sense of reality. … Knowledge-based journalism would provide the steady supply of trustworthy and relevant news that Americans now lack, but sorely need.”

As the example of violent crime suggests, knowledge-based journalism should be grounded in a way of thinking. It’s never been a secret that the U.S. Department of Justice compiles crime statistics, and of course today those numbers are far easier to access than they were 20 years ago. Thus the key is for reporters, editors and news directors to seek out the truth and resist the urge to pander. Obviously that’s easier said than done. The spirit of Walter Lippmann’s quest for scientific journalism permeates “Informing the News,” but as Patterson notes, it has never pervaded more than a fraction of the news media.

Patterson is especially strong in describing the confluence of mindless objectivity and a lack of knowledge. When a journalist doesn’t understand the truth of what he is covering, it’s all too easy simply to present different viewpoints and leave it up to the reader, the viewer or the listener to decide. “The objective model of American journalism offers a weak defense against factual distortions,” Patterson writes. “Not only does the commitment to balance invite such distortions, it allows them to pass unchecked.”

Yet even an empiricist like Patterson can’t overcome human psychology. And one of the obstacles to knowledge-based journalism is that we are wired to adhere closely to our beliefs, regardless of whether they are grounded in reality. Patterson presents research by the Dartmouth College political scientist Brendan Nyhan showing that we tend to cling to misinformation even more tightly after our errors have been pointed out to us.

In a world in which comfortingly false information is never more than a click of the mouse or the cable box away, it is unclear how knowledge-based journalism would reach an audience larger than the one that already seeks reliable news. It is, after all, the genius of the right that it has managed to convince large swaths of the public that The New York Times and NPR are merely liberal equivalents of the Fox News Channel and Rush Limbaugh. Patterson describes the problem, but he doesn’t propose a solution. And it’s hard to imagine what a solution would look like.

So how are we to move in the direction of knowledge-based journalism? Patterson writes that “the university rather than the newsroom is the logical place to develop it,” and he calls for reforms in journalism education along the lines proposed by the Carnegie-Knight Initiative on the Future of Journalism Education — the most relevant being “expertise in the specific subjects to be reported on.” At the very least, journalists should make use of nonpartisan repositories such as the Shorenstein Center’s own Journalist’s Resource, which compiles data and studies in areas ranging from human rights to climate change.

Patterson has made a valuable contribution to the ongoing discussion of what we should expect of journalism at a time when media outlets are multiplying, revenues are shrinking and opinion is elevated over fact-based reporting. Whether we actually embrace knowledge-based journalism or not, he has underscored journalism’s basic mission: to provide the public with the information it needs to govern itself in a democratic society.

5 thoughts on “A compelling case for ‘knowledge-based journalism’”