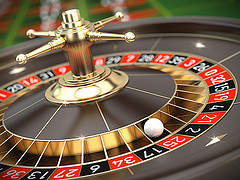 As you may have heard, Taunton voters overwhelmingly approved a tribal casino in a nonbinding referendum on Saturday. But that’s not even close to the whole story.

Residents who live closest to the proposed casino voted even more overwhelmingly against it. According to Cape Cod Times reporter George Brennan, the city voted  7,693 in favor and 4,571 opposed — but “in the two East Taunton precincts where the Mashpee Wampanoag casino is planned, voters rejected it by nearly a 2-1 margin.”

In the Taunton Gazette, reporter Christopher Nichols posts the numbers:

Yet, with regard to Boston’s two daily newspapers, we’re already seeing a repeat of 2007. That’s when the big news was that Middleborough had voted in favor of a deal the selectmen had cut with the Mashpee Wampanoag tribe to build a casino in that town (big news!), and then turned around and took a decisive but nonbinding vote against the casino itself (shhhh … pay no attention).

The proposed Middleborough casino eventually fell apart, but town officials are still hoping there’s a pot of gold at the end of the rainbow. Alice Elwell of the Brockton Enterprise has the latest.

So what happened with the Taunton vote? On Sunday, the Globe’s Mark Arsenault reported on Taunton’s vote in favor of the casino — but made no mention of the results in East Taunton. The Herald did better, publishing Brennan’s Cape Cod Times story (Herald publisher Pat Purcell runs several of Rupert Murdoch’s regional papers, including the Times). But today, the Herald offers a follow-up by Chris Cassidy and Laurel Sweet that omits the vote of the opposition in East Taunton.

Arsenault, in his Globe story, closes by noting that Taunton is a long way from actually hosting a tribal casino. Because of a 2009 U.S. Supreme Court decision, Carcieri v. Salazar, the Mashpee won’t be able to build a tribal casino in Taunton without an act of Congress. Good luck with that.

The Taunton vote demonstrates, once again, that no one wants to live next to a casino. Nor should they have to.

A final casino note: Former Boston mayor Ray Flynn turned out on Saturday to lend his support to East Boston residents opposed to a casino that’s been proposed for Suffolk Downs.

Given that the East Boston plan is already being portrayed as a done deal, it will be pretty interesting to see how a battle between Boston’s former and current mayors (Tom Menino supports the proposal) will play out.

Photo (cc) by s_falkow and republished here under a Creative Commons license. Some rights reserved.