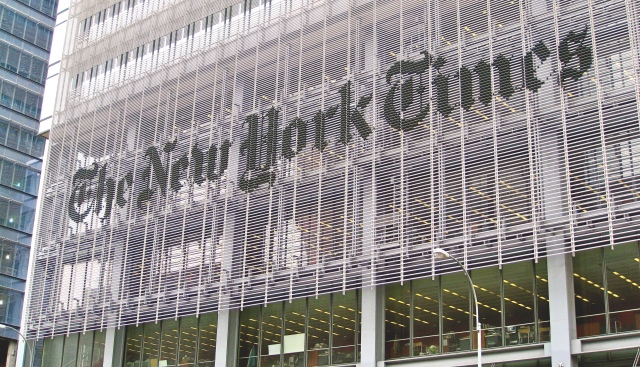 Sarah Palin’s bogus libel suit would appear to be enough First Amendment excitement involving The New York Times. But there’s been another important development. A New York state judge’s ruling that the Times could not publish documents it had obtained belonging to the right-wing undercover operation Project Veritas has been stayed by a state appeals court. Michael Grynbaum reports in the Times:

In a decision made public on Thursday, the appeals court said the order would not be enforced until a formal appeal could be heard. The decision means that, for now, The Times can publish certain documents and will not have to turn over or destroy any copies of the documents in its possession.

As I wrote recently, Judge Charles D. Wood had prevented the Times from publishing the documents on the grounds that Project Veritas is in the midst of suing the Times for libel, and that the documents were protected by attorney-client privilege. But the Times has contended that it obtained the documents as a result of its reporting, not from discovery in the legal case, and Veritas has presented no evidence to the contrary — as Wood himself conceded.

Wood’s stunning overreach should have been overturned within hours, and I’m shocked that it’s taken this long. The First Amendment principle that prior restraint should only be exercised in the rarest of circumstances. That’s why the Supreme Court allowed the Times and The Washington Post to publish the Pentagon Papers despite the Nixon administration’s claim that to do so was a serious violation of national security. Wood’s decision in the Project Veritas case reads like a parody.

Here’s what the Times should do next: publish all the documents. Today. And encourage widespread copying. It’s not enough just to push back at Wood. His defiance of constitutionally guaranteed protections for the press needs to be held up to widespread condemnation.

Support this free source of news and commentary by becoming a member of Media Nation for just $5 a month.

On Christmas Eve, Wood issued an order forbidding The New York Times from publishing confidential documents it had obtained detailing legal advice given to Project Veritas, a right-wing organization that specializes in hidden cameras and infiltration. Moreover, Wood ruled that the Times would have to return the documents to Project Veritas and destroy any electronic copies that it held.

“In defiance of law settled in the Pentagon Papers case,” said Times publisher A.G. Sulzberger in a statement, “this judge has barred The Times from publishing information about a prominent and influential organization that was obtained legally in the ordinary course of reporting.”

The decision follows a temporary ruling Wood issued more than a month ago to stop the Times from making further use of the documents. The Times appealed that ruling, but an appellate court declined to act. (On late Tuesday, a state appeals court ruled that the Times does not have to turn over or destroy the documents in its possession, at least for now.)

Here’s some background. Last spring, Project Veritas, headed by the notorious James O’Keefe, sued the Times for libel, claiming that the Times’ reference to two Veritas videos about voter fraud as “deceptive” was false and defamatory.

Then, in an unrelated matter, the Times in November published a story following up news that federal officials were investigating Veritas’ possible involvement in stealing a diary kept by Ashley Biden, President Joe Biden’s daughter. In that story, the Times quoted from confidential documents that Veritas had received from its lawyers on how to carry out its dubious stunts while avoiding legal trouble. Those documents predated Veritas’ lawsuit against the Times by several years. The Times contends they were obtained through its reporting, not through pretrial discovery in the libel case.

And by the way, don’t be fooled by Wood’s lofty title — there are 62 supreme courts in New York State. He is, in fact, a trial-court judge, elected to that position in 2009 after serving as an aide to former state senator Nicholas Spano, a Republican who pleaded guilty to federal tax-evasion charges in 2012.

But you don’t have to have a sterling judicial pedigree to know that if the First Amendment stands for anything, it stands for the proposition that the government may not ban anyone from publishing or broadcasting. Yes, there are certain narrowly drawn exceptions; serious breaches of national security, incitement to violence and obscenity may all be censored.

Still, the rule against prior restraint is robust enough to have led the Supreme Court to allow the Times and The Washington Post to publish the Pentagon Papers, the government’s own secret history of the Vietnam War. It also led a federal judge in 1979 to agonize over a decision to prohibit The Progressive, a small left-wing publication, from publishing an article on how to build an atomic bomb.

“A mistake in ruling against The Progressive will seriously infringe cherished First Amendment rights,” U.S. District Court Judge Robert Warren wrote. But, he added portentously, “A mistake in ruling against the United States could pave the way for thermonuclear annihilation for us all. In that event, our right to life is extinguished and the right to publish becomes moot.” (Warren imposed a temporary restraining order and told The Progressive and the government to work out a compromise. That order was rendered moot when a different publication ran a similar article.)

No such agonizing over the prospect of muzzling the press is evident in Wood’s opinion. Take, for instance, his ruling that the information contained in the confidential documents the Times reported on are not a matter of “public concern.” A finding to the contrary might have opened the door to the Times’ publishing the documents despite Wood’s erroneous assertion that the attorney-client privilege is at stake.

“Undoubtedly, every media outlet believes that anything that it publishes is a matter of public concern,” Wood wrote. “The state of our nation is that roughly half the nation prioritizes interests that are vastly different than the other half.”

This is Wood setting himself up as editor, deciding what’s newsworthy and what isn’t. The documents concerned advice from Project Veritas’ lawyers on how to avoid legal trouble when carrying out its undercover operations. Surely that’s of public concern, especially since the courts have set the threshold for newsworthiness at a very low level precisely so that they can avoid playing editor.

But the larger issue here is Wood’s breathtakingly expansive definition of what’s covered by the attorney-client privilege. It’s true, of course, that if the Times had simply reported on the contents of documents Project Veritas had turned over to the Times’ lawyers during pretrial discovery in the libel case, the judge would be justified in his outrage. But there is no evidence to contradict Sulzberger’s assertion that the documents were obtained in the normal course of reporting — as Wood concedes.

“There is nothing in the record to show how the Times obtained the privileged memoranda that belong to Project Veritas,” Wood wrote. “That information is solely within the Times’ knowledge and possession, and it has not offered any explanation beyond vaguely stating that the memoranda were obtained through its ‘newsgathering effort.’”

Wood follows that up with a weird, gratuitous suggestion that perhaps the Times obtained the documents through bribery. And then, in ruling against the Times, Wood wrote:

In other words, the Times is not free to publish or report on the documents in question even though it claims to have obtained them in the normal course of reporting, and even though Wood admits there is no evidence to the contrary.

This is an outrage against the First Amendment. “The opinion is jaw-dropping in its constitutional illiteracy,” wrote Ruth Marcus in The Washington Post.

Added Stephen J. Adler and Bruce D. Brown of the Reporters Committee for Freedom of the Press: “The First Amendment does not tolerate the idea that speech can be censored in advance, even if it might be punished after the fact. This is because prior restraints do not just ‘chill’ speech on public affairs, they ‘freeze’ it, which can give the government and private litigants a powerful tool to hide information and to skew public debate.”

What’s worse is that Wood’s ruling provides an incentive for the target of investigative reporting to sue the news organization and then use that suit to shut down any further reporting by claiming attorney-client privilege. Theodore J. Boutrous Jr., a media lawyer whose clients include CNN, put it this way in an interview with the Times:

The Times says it plans to appeal Wood’s decision. Good luck with that. Although it presumably would take a few years, eventually the case might make its way before the U.S. Supreme Court. With a right-wing majority, the court could, if it chose, inflict incalculable damage.

We should all hope that Wood’s assault on freedom of the press is halted at the state level — and that this threat to the First Amendment fades to the obscurity it deserves.