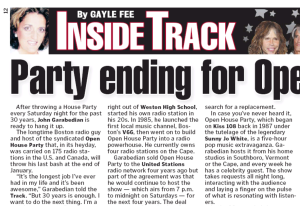 Time was when the “Inside Track,” the Boston Herald‘s gossip column, was among the most read—and feared—media outposts in the city. For years, Laura Raposa and Gayle Fee tracked the famous and tormented the powerful. And before them was the late Norma Nathan, whose column was called “The Eye.”

Well, gossip isn’t what it used to be. Raposa retired a few years ago into order to become a professional foodie along with her husband (and former Media Nation roommate) Steve Syre, a retired business columnist for the Boston Globe. Together they operate the Foodsmith in Duxbury.

And now Fee is leaving the Herald, according to an email she sent to colleagues that I obtained a little while ago. Her last day is Friday, but she’s working right up until the end: today she has a piece on the retirement of local man-about-town John Garabedian as well as a compilation of tidbits.

Here is the text of Fee’s email:

Hello Everyone—Please excuse the mass email—I wanted to let you all know that Friday will be my last column for the Boston Herald. After 33 years at the paper, 25 at the Inside Track, it’s time for me to say goodbye….

I wanted to say what a pleasure it has been to work with all of you over the years and hopefully we will stay in touch.

And best wishes to Fee as she embarks on the next phase of her life.