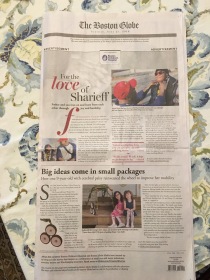 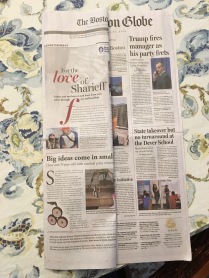 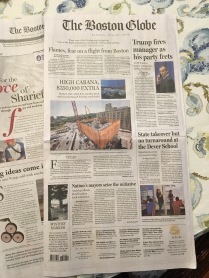 One of the few disadvantages of being a digital subscriber to the Boston Globe is that whenever there’s news regarding the print edition (except on Sundays), I’m usually the last to know.

So … today the Globe published a four-page wraparound of sponsored content from Children’s Hospital that looks like the front page, though it’s clearly labeled as advertising. I’ve seen half-page ad treatments in newspapers, which I’ve tried to emulate with the image in the middle. But I haven’t seen a full page (at left) before. The actual front page, which you get to once you pull off the wraparound, is at right.

The Children’s Hospital content is featured on BostonGlobe.com and Boston.com as well, although there’s nothing unusual about the online treatment.

The verdict: We all know this wouldn’t have flown 10 or maybe even five years ago. But there is no money in the newspaper business these days. I’m willing to be very understanding of any form of advertising as long as it’s properly labeled.

On the other hand, you don’t want to do anything that alienates your best customers—that is, your print subscribers. So, yes, I would have preferred it if the Globe had tried to talk Children’s into going for the half-page treatment instead.

10 thoughts on “The Globe runs a wraparound front-page ad”