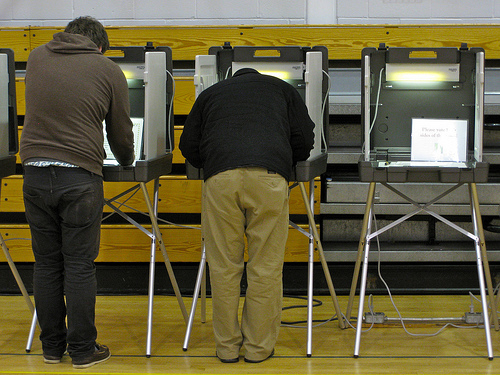 Right after supper, Mrs. Media Nation, Media Nation Jr. and I headed over to the Holten Richmond Middle School in Danvers to cast our ballots in the 2010 election. It was a proud moment — this was our son’s first time voting, so we are now officially a three-voter household. Next time there should be four of us.

There are eight precincts in Danvers, and Precints 1 and 2 vote at the Holten Richmond. I was the 1,233rd person in Precinct 1 today. Given that the polls would close in a little more than an hour, that didn’t strike me as particularly high. Nor was there any line when we came in.

After voting, I took a couple of photos of the stalwart volunteers who had set up on the edge of Plains Park so they could wave to passing motorists. Everyone seemed to be having a good time. And, pretty soon, we should have some results.

One thought on “Election Night in Danvers”