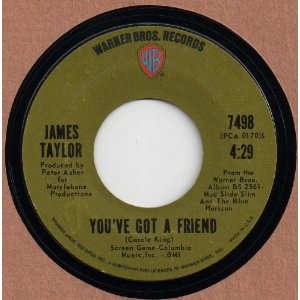 Over at Blue Mass. Group, there’s an interesting debate taking place over copyright and fair use in reaction to a new ad put together by the Massachusetts Republican Party. The ad is nothing special — it shows President Obama and Gov. Deval Patrick amid various bad-news headlines about the weak economy. What’s notable is the soundtrack: a 57-second excerpt from “You’ve Got a Friend,” written by Carole King (potential plaintiff #1) and performed by James Taylor (potential plaintiff #2).

BMG co-editor David Kravitz has done yeoman work in showing that use of the song probably adds up to copyright infringement. Under the fair-use doctrine, you can use someone’s copyrighted material without permission for certain purposes, including parody. But according to a case Kravitz found, the parody must be directed at the copyright-holder in order for it to pass muster, not at some third party or parties.

Kravitz is probably right, but I still think there’s an argument to be made (I make it here) that the ad should be considered fair use: it’s political speech, which traditionally receives the highest level of First Amendment protection; it’s not taking a penny out of either King’s or Taylor’s pockets, the most important element in the four-part fair-use balancing test; and if media corporations like Disney hadn’t lobbied Congress to extend the copyright period from the traditional 28 years (originally 14) to the absurdly long terms that prevail today, then the ad wouldn’t even be an issue.

What I find interesting in the comment thread is the degree to which even progressives have internalized talking points put forth by the media conglomerates in arguing that the Republicans are in the wrong. Frankly, there’s someone wrong with a copyright regime if it’s illegal to grab barely a fifth of a 39-year-old song in order to make a political point.

But as we know, even as technology has made it ever easier to engage in copyright, the copyright protections that media corporations demand have grown ever more draconian.

25 thoughts on “Copyright, fair use and the limits of political speech”