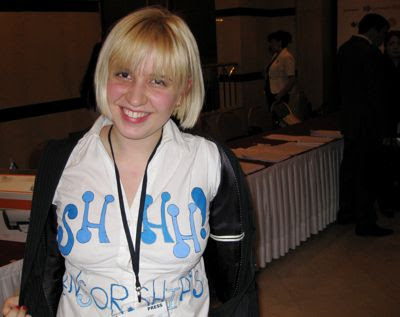 The InterContinental Hotel in Almaty, Kazakhstan, is about as isolating an experience as you can imagine. The luxurious surroundings — and the ever-present security guards — effectively separated the several hundred journalists attending last week’s Eurasian Media Forum from whatever was going on outside.

So it was something of a surprise when that separation was breached last Friday afternoon. Between a panel on the global media crisis, which I moderated, and a panel on blogging, in which I participated, several people approached us with handouts, warning of proposed laws that would crack down on Kazakhstan’s burgeoning blogosphere. We exchanged pleasantries, and that seemed to be that.

Then, during the blogging panel, one of them — an audacious 24-year-old woman named Yevgeniya Plakhina, wearing a shirt that proclaimed “SHHH!” — got up and demanded to know why six of her friends had been arrested for demonstrating against the proposals.

The moderator, Vladimir Rerikh, a Kazakh journalist, clearly wanted the issue, and Plakhina, to go away. But Danny Schechter, a well-known American progressive journalist, spoke up on Plakhina’s behalf, and she was able to continue pressing her case. (Here is Schechter’s account.) The organizer of the conference, Dariga Nazarbayeva, the daughter of President Nursultan Nazarbayev, could be seen talking on her cell phone, leaving the hall and returning several times.

Afterward, Plakhina, a reporter for the newspaper Respublika, was hanging around in the lobby. I approached her for an interview and asked to take her picture. I explained that I would be posting her picture on my blog, and asked if that would create any problems for her. She said it would not, and posed willingly.

Listen to an interview with Yevgeniya Plakhina

According to the materials Plakhina gave me, the Kazakh government proposes to regulate all online media — forums, chatrooms, blogs and social networks — by the same laws that currently govern mass-media outlets, which are not exactly based on the principles of the First Amendment. The legislation, if passed, could result in the blocking of foreign mass-media Web sites as well. In addition, the mass media would be prohibited from calling for peaceful demonstrations, according to the materials.

Plakhina told me that her group, For a Free Internet, began on March 2 by leaving comments on the prime minister’s blog — more than 70 on the first day, and 400 within a week. The comments were all expunged, she added, and moderation was turned on, making it impossible to leave any further messages.

On March 7, the campaign staged a flash-mob event in front of the office of the national Internet provider, she said. She gave me a DVD of the event.

Her friends were quickly released from jail. In an e-mail exchange yesterday, Plakhina told me:

Yes, my friends were released shortly after the session finished. I guess, the authorities were scared of international scandal, and released my friends. An advisor to the president on mass media Yermukhamet Yertysbayev has taken an active participation in releasing my friends. He came up to me at media forum and asked what happend with my friends, made a call and they’ve been released. They haven’t been charged with anything because we didn’t even start the demonstration (well, it was supposed to be a flash mob, not even a demonstration). Policemen had nothing to charge us with.

Kazakhstan is not North Korea, but neither is it a country where press freedom is firmly established. Several days ago, according to the Associated Press, an opposition newspaper publisher was imprisoned because he had not paid damages in a libel suit that, according to his supporters, was politically motivated.

Reporters Without Borders ranks Kazakhstan as 125th out of 169 countries in terms of press freedom. In addition, as Adil Nurmakov of Global Voices Online (one of numerous signers of Plakhina’s letter) has reported, the blogging platform LiveJournal has been censored by the government. (Not to get too self-righteous: the United States ranks only 36th in the Reporters Without Borders report, and 119th in its “extraterritorial” practices, including its imprisonment of an Al-Jazeera videographer at Guantánamo for six years.)

Plakhina’s group is trying to take advantage of the fact that Kazakhstan is about to assume the chairmanship of the Organization for Security and Cooperation in Europe, arguing that the proposed laws are contrary to the democratic spirit of the OSCE.

EurasiaNet has a thorough account of the proposed legislation.

During my brief time in Kazakhstan, I got the impression that the government is trying to move beyond its repressive past. The country, a former Soviet republic, also seems to be an island of stability in a volatile part of the world. It would send a strong and encouraging message if the government drops its proposal to censor speech online.

For more information, you can contact For a Free Internet at blokirovke {dot} net {at} gmail {dot} com.

11 thoughts on “Free the Kazakhstan Internet”