After nearly three years of increasingly fraught negotiations, the Boston Newspaper Guild and Boston Globe Media Partners have finally reached agreement on a new three-year contract. The Guild is the union that represents newsroom employees at the Globe as well as several other departments. Staff members at Boston.com and Stat News are included as well.

Don Seiffert has the details in the Boston Business Journal, reporting that about 85% of Guild members approved the contract proposal, which calls for raises, a signing bonus, a new parental-leave policy, the continuation of overtime pay and unspecified protections against outsourcing.

Become a member of Media Nation for just $5 a month!

The Globe has been growing in recent years, as its paid digital subscription drive has led to profitability (at least before the pandemic) and new hires. William Turville wrote in the U.K.-based Press Gazette last week that digital-only subscribers have settled in at about 225,000, as the paper has retained most of those who signed up at a big discount during the height of COVID-19.

Still, there are warning signs for owners John and Linda Henry, as Seiffert notes. The contract talks grew increasingly contentious over time. In September, Sens. Elizabeth Warren and Ed Markey pulled out of a Globe-sponsored event in order to show their support for the union.

“There’s definitely a sour taste lingering in our mouths,” an anonymous union member told Seiffert. “I doubt any of us will trust our owners as much as we once did.”

Such feelings are understandable but can be overcome with time. The best way to do that is to put out a great newspaper.

Here’s a statement from management, as reported by the Globe:

A Globe spokesperson said the contract “provides strong protections and economic benefits for Guild members and we will immediately start working together on its implementation.”

“The Globe remains committed to journalistic excellence and a relentless focus on providing the best possible service to our region,” the spokesperson said in a statement. “We will continue to invest and innovate in order to ensure that the local, independent journalism that our community has relied on for nearly 150 years will thrive and be sustainable for many years to come.”

And here’s a statement from the Guild, provided Friday night by a trusted source:

Following the tabulation of today’s vote, we are pleased to announce that Guild membership has voted to ratify the three-year tentative contract agreement between the Boston Newspaper Guild and Boston Globe Media Partners.

Together, the two parties have reached an agreement that will benefit the approximately 300 members of the Guild while also providing the company some of the operational flexibility it desired to chart a path for the company’s future success.

As soon as the contract is officially ratified by both parties, which will happen in short order, Guild members will receive a $1,000 signing bonus and a 3 percent raise on their base salary. At the start of year two and year three of this agreement, members will receive 2 percent raises. After nearly three years of difficult negotiations, it is nice to know that our members will have some extra money coming in during the holidays.

Additionally, this agreement will help codify crucial employee rights that were at risk during many stages of these negotiations. All employees will be protected by the Guild’s powers of grievance and arbitration in matters of discipline, termination, and any attempt by the Globe to create new company policies. The Guild also ensured that strong fences have been put around the company’s ability to subcontract work to outside providers, a crucial compromise that protects the integrity of our newsroom. This agreement also retains the successors and assigns clause from our prior CBA, which means that the vast majority of Guild members will enjoy all of the rights afforded by this contract in the event that the Globe comes under new ownership.

This contract would not have been possible without the time and effort of so many of you who chose to fully engage, show up, and do the hard work required, despite the demands of your own busy lives. Through your words and actions over the last three years, we have reached an agreement that stands in stark contrast to the one we were first offered back in 2018. Over the next three years, we hope that every member will continue to stay involved and be vocal about policies you believe will create a better, stronger Boston Globe.

The Boston Globe is expanding, according to chief executive officer Linda Pizzuti Henry.

The news comes in the form of a full-page ad in Sunday’s print edition — an odd choice, given that the Globe has about 220,000 digital-only subscribers and, according to the Alliance for Audited Media, has a Sunday print circulation of about 140,000. But maybe a lot of those digital subscribers use the e-paper and saw it anyway. (Update: I’m told Henry’s message was emailed to digital subscribers last week. I can’t imagine why I didn’t see it, but there you go.)

Henry begins by thanking readers following a difficult year of pandemic, economic collapse and “an overdue reckoning around race, equity and social justice.” And, of course, she praises the Globe as a “local, independent news organization,” citing highlights such as the paper’s COVID coverage, Mark Shanahan’s article and podcast about recovering from prostate cancer and “A Beautiful Resistance,” a celebration of Black life in New England by culture columnist Jeneé Osterheldt.

Now about the expansion:

Particularly welcome is the news that the Globe will be “improving our mobile app experience.” I hope those improvements extend to tablets as well as phones.

We all have our quibbles with the Globe, but the past few years have been extraordinary in putting the paper on a sustainable financial footing.

Publisher John Henry announced in late 2018 that the Globe had become profitable after years of losses and cost-cutting. The paper passed the 200,000 digital-subscription mark in early 2020, a long-sought measure of viability. And when Linda Henry was made CEO of Boston Globe Media Partners in November, the company said it currently employs more than 300 full-time journalists across its three platforms — the Globe, Stat News and Boston.com.

That is an impressive number at a time when The Denver Post’s newsroom, to cite just one example, has been slashed to about 60 by its hedge-fund owner, Alden Global Capital.

The full-page ad appears below. 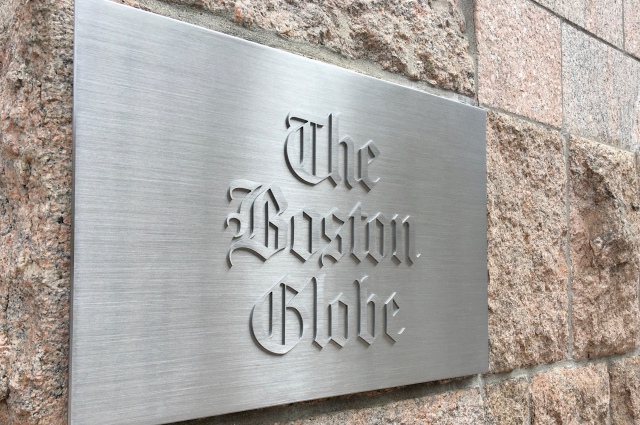 Surprising though the news may have been, there was a certain inevitability to Linda Pizzuti Henry’s being named chief executive officer of The Boston Globe’s parent company.

She had long held the title of managing director, and it has become increasingly clear over the past few years that she and her husband, publisher John Henry, were determined to impose their will on the media properties they own. Indeed, the Henrys have been calling pretty much all the shots on the business side since the summer, when Vinay Mehra exited as president and was not replaced.

These are the best and worst of times for media organizations. The COVID-19 epidemic and the presidential campaign have resulted in renewed interest in the news as well as growing audiences. But advertising, already in long-term decline, has fallen off a cliff.

The Globe is no exception to those trends. Earlier this year, the Globe passed the 200,000 mark for digital-only subscriptions, a long-sought-after goal. Another Globe Media property, Stat News, has established itself as one of a handful of go-to sites for news about COVID.

Yet the paper, reportedly profitable before the pandemic, has been forced to trim its budget to adjust to the pandemic economy, cutting back on its use of freelancers and paid interns, for example, as well as implementing some business-side reductions.

Time will tell what the Linda Henry era will bring. But here are three thoughts that I think are worth keeping in mind:

• There is no longer any middleman. With co-owners John and Linda Henry holding the top two positions, all the heat will now be directed their way, for better or worse. When Mehra was in charge — and, before him, Doug Franklin and Mike Sheehan — both credit and blame could be deflected.

Now the Globe is the Henrys’ paper in every respect. That extends into the editorial operations as well given that editor Brian McGrory was actually involved in recruiting John Henry to buy the paper and that editorial-page editor Bina Venkataraman was hired by the Henrys.

For a useful contrast, consider The Washington Post. Although owner Jeff Bezos does involve himself in business strategy to a degree, he hired a publisher, Fred Ryan, to run the paper on a day-to-day basis, and left the executive editor (Marty Baron), the editorial-page editor (Fred Hiatt) and the top technology executive (Shailesh Prakash) in place after he acquired the paper.

• The Henrys must now settle an ugly labor dispute on their own. Earlier today the Boston Newspaper Guild, involved for quite some time in acrimonious contract talks with management, issued a statement ripping the Henrys for using the law firm of Jones Day, which critics say has a reputation for union-busting.

That’s not new. What is new is that Jones Day has been involved in representing Republicans in their attempt to overturn the results of the presidential election. “How can the Globe’s political journalists be asked to continue to endure such workplace attacks from the very law firm whose actions they are now reporting on and investigating?,” the union’s letter asks.

• The Globe is not for sale. From time to time, rumors have circulated within the newsroom and in the larger community that the Henrys are looking to get out. This happened most recently last fall, when Linda Henry presided over a town hall-style meeting on Zoom at which she was asked about a replacement for Mehra.

When I asked her about it, she replied via email, “The Globe is not for sale, I’m pretty sure you would have picked up on if it was.” After that, the rumors appeared to fade away. Now, by occupying the top two operational roles at the Globe, the Henrys, seven years into their ownership, clearly seem to be sending a signal that they’re in it for the long term.

Comments are open. Please include your full name, first and last, and speak with a civil tongue.