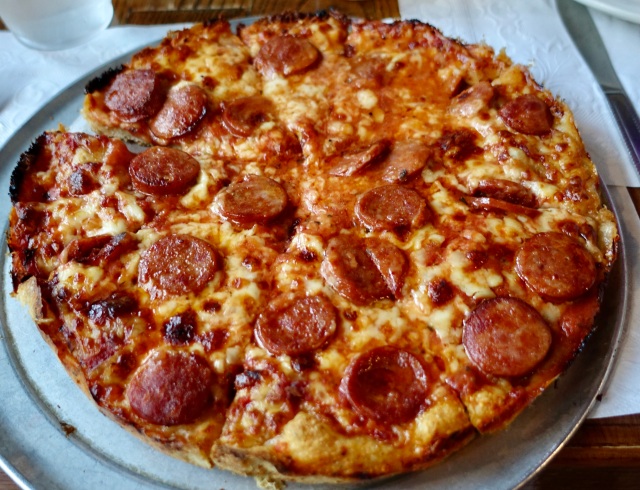 When I was a kid growing up in Middleborough, we didn’t eat pizza for supper — it was a treat, not a meal. Every so often my parents would get hungry while we were watching TV. That’s when my father would order a pizza from the Central Cafe and pick it up. We’d each have a slice or two.

According to just about everyone, the Central had the best pizza in Middleborough. We would always order the linguica — a sweet Portuguese sausage, befitting the heavy Portuguese population in Southeast Massachusetts. It would be sliced into disks that curled up in the oven. Believe it or not, I don’t think I even tried pepperoni until I was a teenager. And I guess you’d say it was a bar pizza, which my friend Marc Hurwitz has explained is a pizza whose ingredients go right out to the edge, so there’s no waste. As I understand it, bar pizza is a South Shore thing; Middleborough is south of the South Shore.

By some miracle, the Central is still there. So last Saturday five of us met for their first Central experience, and my first Central pizza in probably 50 years. The menu was far more extensive than it was back in the ’60s, when I’m pretty sure that pizza was the only thing offered. These days, it goes on and on. 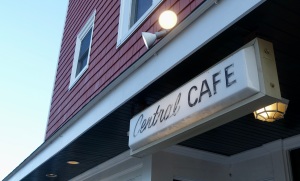 I ordered a Caesar salad; it was not a Caesar salad. There was no cheese — but there was a copious amount of bacon on top. Did I say bacon? It was a pretty damn good salad, even if they ought to come up with another name for it. I also got a Harper Lane IPA, which was excellent.

But we’d come for the pizza. My wife and I split a pizza with sliced linguica while my son and his girlfriend split one with ground linguica. (My daughter for some reason ordered spaghetti and meatballs.) It was not exactly as I remembered it, but that’s not to say it wasn’t great. It was. The crust was thicker than I recall, as were the linguica slices, so they stayed flat rather than curling up. I don’t know what kind of cheese they used, but it had a fuller taste than you get with most pizza — a bit like Modern Apizza in New Haven, which might actually have the best pizza in the world.

Anyway, mission accomplished. We hit the local Dairy Queen before heading back to Medford. And I was thrilled to learn that the Central still has fantastic pizza.

Speaking of pizza, for just $5 a month of your dough you can become a member of Media Nation. Just click here.