Journalism about human rights is both important and dangerous. That was the message at the K. George and Carolann S. Najarian Lecture on Human Rights at Faneuil Hall, endowed by the Armenian Heritage Foundation and held Thursday night.

To see a Storify of live tweets about the event, please click here.

Musician Stephen Baird, the founder of Street Arts and Buskers Advocates, offers more details on Mayor Tom Menino’s crackdown at Faneuil Hall. In an e-mail to Media Nation, Baird notes that the steel fence erected by city and federal officials blocks the Freedom Trail, something the irony-deprived mayor no doubt fails to appreciate.

I reproduce Baird’s e-mail (which I have lightly edited) with his permission:

The City of Boston and National Park Service put a fence around one of the premier symbols of freedom in America — Faneuil Hall. The fence actually blocks the Freedom Trail. This was done to disenfranchise the civil rights of street artists and the general public who freely choose to peaceably assemble and support them. The fence is a blight not only on the city, but the country. The fence, similar to the old Berlin Wall, is a symbol of Mayor Thomas Menino’s and other government officials’ failure to develop intelligent and equitable public policies and regulations.

There was no warning or public process before this crackdown. Portrait artists, living statues and street performers were suddenly told they could no longer exercise their First Amendment artistic expression in this public park by the police. There are no written guidelines or laws, just the arbitrary whim of the police officers and government officials of where people can perform and audiences can gather.

These actions are all being done in direct defiance of stipulation by Boston city attorneys in the federal court case Community Arts Advocates Inc. v. City of Boston et al. (December 2004), where they stated artists would not be stopped from exercising their First Amendment expression in Sam Adams Park.

I sued the City of Boston 2004-2006 over arrests and threats of arrest in Boston Common, Downtown Crossing, Copley Square and Sam Adams Park.

The city repealed old Police Rule 75 (from 1850s) and a new law (403) that was just as bad on December 23, 2004, in front of Federal Judge Nancy Gertner. I was threatened with arrest in Sam Adams Park while conducting an interview with Boston Phoenix about this court case. See photograph and details.

I argued that the city could not allow Faneuil Hall audition artists to use Sam Adams Park and not allow other artists. And I won.

I proposed an ordinance similar to the Cambridge ordinance, but the city stated it would use other laws, including the noise ordinance, to control performances. The police have since failed to monitor sound levels with decibel meters. (Sound is also supposed to be inaudible at 100 feet, which could control bucket drummers). The city cannot control performance location issues with out doing drastic, heavy handed and unconstitutional ad hoc use of other laws. See the front page Boston Globe story by Donovan Slack on Aug. 1, 2008.

The City of Boston put chairs and tables in the primary performance area in Sam Adams Park, which pushed artists next to the restaurant that caused the current complaints.

The closing of Filene’s and construction of Downtown Crossing has pushed many artists to Sam Adams Park. There are many conflicts of space, sound and other issues between artists. Artists — Balloon, Living Statues, Portrait Sketch, Bucket Drums — started to set up on north side of Faneuil Hall facing Quincy Market, which has curtailed and caused major tensions with Quincy Market artists.

As long as the city fails to set up performance location guidelines, a lottery system to share the performance locations/time and enforce the noise ordinance consistently/fairly (the police and firemen union picket demonstration were 10 times louder then any performers at Sam Adams Park), then the situation will flare up with arrogant abuse of power that is both mean-spirited and unconstitutional.

I suspect the only way I will be able to bring any measure of equity to this situation is through the federal court.

Cultivating ongoing fundamental relationships between artists and communities by celebrating self-expression as a basic human right essential for the healthy growth of youth, individuals and communities.

Menino’s last tangle with Baird resulted in His Honor’s receiving a 2005 Phoenix Muzzle Award. It looks like he’s well on his way to winning another one. 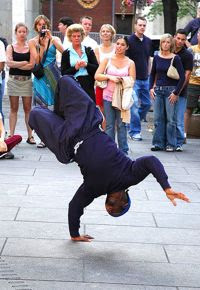 Boston Mayor Tom Menino has really outdone himself with his edict to crack down on street performers at Faneuil Hall Marketplace. His Honor has always tended to prefer other people’s free speech in moderation, but this is ridiculous.

Adam Gaffin: “Staring down from his cave with a sour, Grinchy frown.”

The Outraged Liberal: “I didn’t realize balloon artists were so noisy, although I admit to occasionally getting chills when you twist a balloon and it makes a little squeak.”

What really gets me about Boston Globe reporter Donovan Slack’s story is that this is apparently being done, in part, for the benefit of restaurant patrons sitting outdoors on warm summer days and nights. I mean, we can’t have people who are spending money being bothered by people who aren’t, can we?

“When it’s nice, we like to open the doors,” a restaurant manager named Jennifer Achevarria told Slack. “Our biggest concern is the noise level, which directly affects our paying guests and disturbs the ambience.”

Good grief. And in the shadow of Faneuil Hall no less. Samuel Adams would be frowning on the beer named after him if Jim Koch hadn’t already shrunk his picture to near-invisibility.

Photo (cc) by Chris Kirkman and republished here under a Creative Commons license. Some rights reserved.