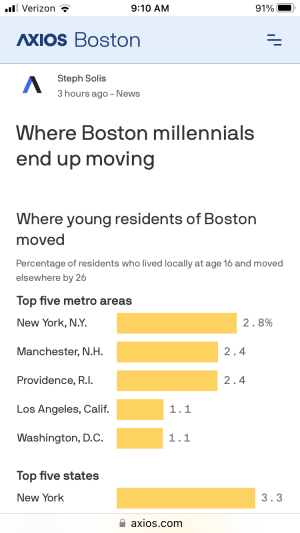 What will the sale of Axios mean for Boston news consumers? It’s too early to tell. But there are a couple of intriguing tidbits that emerged from the news that the digital startup will be acquired by Cox Enterprises for $525 million, a story first reported by Ben Mullin of The New York Times.

First, the sale appears to be good news for Axios Local. According to Rick Edmonds of Poynter Online, Cox isn’t looking to walk away from the local newsletters it’s been building out in order to concentrate on national politics. Instead, Cox wants to accelerate the growth of Axios Local. “Our goal of 100 cities is in reach,” publisher Nick Johnston told Edmonds. “I have a list of 384 metropolitan areas in my office, and we cross them off one by one.”

Second, Cox is a minority owner of WFXT-TV (Channel 25) in Boston, the home of Boston 25 News. Two months ago, Axios launched a Boston newsletter produced by veteran journalists Mike Deehan and Steph Solis. Although I’m in no position to know what the strategy will be moving forward, it’s not difficult to imagine Axios Boston amplifying big stories from Boston 25, or featuring Deehan and Solis on its newscasts.

Of course, you should always follow the money. Jim VandeHei, Mike Allen and John Harris never had an opportunity to cash in after they left The Washington Post to found Politico in 2007. VandeHei and Allen were the marquee names who left Politico in 2016 to start Axios (Harris stayed behind). Monday was their big payday.

By the way, Ellen Clegg and I interviewed Deehan recently on the “What Works” podcast, so please give it a listen.

Correction/clarification. Axios has been acquired by Cox Enterprises, which spun off its television and radio stations to the hedge fund Apollo Global Management a couple of years ago. Those stations now do business as Cox Media Group. But wait: Cox Enterprises continues to hold an ownership stake in Cox Media Group, including Boston 25. Earlier this year, it was announced that Cox Media would sell Boston 25, but it’s unclear whether Cox Enterprises would keep its minority stake. So what I said above could still happen, but it’s a lot more complicated than I had realized.

Here’s the answer to today’s Newspaper Jeopardy question: “Maybe, if there’s a willing buyer and seller.”

Now for the question: “With Rupert Murdoch getting out of the Boston television market, is there any chance that he would have another go with the Boston Herald?”

Following Tuesday’s announcement that Cox Media Group would acquire WFXT-TV (Channel 25) from Murdoch’s Fox Television Stations as part of a Boston-San Francisco station swap, there has been speculation as to whether Murdoch would re-enter the Boston newspaper market. Universal Hub’s Adam Gaffin raises the issue here; the Boston Business Journal’s Eric Convey, a former Herald staff member, addresses it as well. I’ve also heard from several people on Facebook.

First, the obvious: There would be no legal obstacles if Murdoch wants to buy the Herald. The FCC’s cross-ownership prohibition against a single owner controlling a TV station and a daily newspaper in the same market would no longer apply.

Now for some analysis. Murdoch is 83 years old, and though he seems remarkably active for an octogenarian, I have it on good authority that he, like all of us, is not going to live forever. Moreover, in 2013 his business interests were split, and his newspapers — which include The Wall Street Journal, The Times of London and the New York Post — are now in a separate division of the Murdoch-controlled News Corp. No longer can his lucrative broadcasting and entertainment properties be used to enhance his newspapers’ balance sheets.

Various accounts portray Murdoch as the last romantic — the only News Corp. executive who still has a soft spot for newspapers. The Herald would not be a good investment because newspapers in general are not good investments, and because it is the number-two daily in a mid-size market. Moreover, the guilty verdict handed down to former News of the World editor Andy Coulson in the British phone-hacking scandal Tuesday suggests that Murdoch may be preoccupied with other matters.

On the other hand, who knows? Herald owner Pat Purcell is a longtime friend and former lieutenant of Murdoch’s, and if Rupe wants to stage a Boston comeback, maybe Purcell could be persuaded to let it happen. Even while owning the Herald, Purcell continued to work for Murdoch, running what were once the Ottaway community papers — including the Cape Cod Times and The Standard-Times of New Bedford — from 2008 until they were sold to an affiliate of GateHouse Media last fall.

There is a storied history involving Murdoch and the Herald. Hearst’s Herald American was on the verge of collapse in 1982 when Murdoch swooped in, rescued the tabloid and infused it with new energy. Murdoch added to his Boston holdings in the late 1980s, acquiring Channel 25 and seeking a waiver from the FCC so that he could continue to own both.

One day as that story was unfolding, then-senator Ted Kennedy was making a campaign swing through suburban Burlington. As a reporter for the local daily, I was following him from stop to stop. Kennedy had just snuck an amendment into a bill to deny Rupert Murdoch the regulatory waiver he was seeking that would allow him to own both the Herald and Channel 25 (Kennedy’s amendment prohibited a similar arrangement in New York). At every stop, Herald reporter Wayne Woodlief would ask him, “Senator, why are you trying to kill the Herald?”

The episode also led Kennedy’s most caustic critic at the Herald, columnist Howie Carr, to write a particularly memorable lede: “Was it something I said, Fat Boy?” Years later, Carr remained bitter, telling me, “Ted was trying to kill the paper in order to deliver the monopoly to his friends” at The Boston Globe.

Murdoch sold Channel 25, but in the early 1990s he bought it back — and sold the Herald to Purcell, who’d been publisher of the paper, reporting to Murdoch, for much of the ’80s. It would certainly be a fascinating twist on this 30-year-plus newspaper tale if Murdoch and Purcell were to change positions once again.

Here’s a late-afternoon bombshell for you: WFXT-TV (Channel 25) has been acquired by Cox Media Group, part of a station swap that will result in Fox owning two TV stations in San Francisco. Cynthia Littleton of Variety has the details.

I hope the move from Fox to Cox doesn’t harm the local news operation. Fox 25 News is one of the better-funded news organizations in Boston, with a fair number of people who are native to the area — including anchors Maria Stephanos and Mark Ockerbloom. Mike Beaudet, who’s joining our faculty this fall, is an award-winning investigative reporter.