In late 1990 and early 1991 I spent four and a half months as the production manager for The Pilot, the Archdiocese of Boston’s venerable weekly newspaper. It was a difficult time in my life, and I was happy to take the job. They didn’t ask if I was a Catholic; I didn’t tell them I wasn’t.

One of my responsibilities was to proofread and lay out Cardinal Bernard Law’s weekly column. There wasn’t much to that particular task. As I was reminded in reading Law’s obituary this morning, he had spent the early part of his career as the editor of a Catholic newspaper.

Of course, Law’s facility with a typewriter is not the first thing we think of when we look back upon his legacy. Law was an evil man — evil in the way of people who accept the realities of whatever bureaucratic environment they happen to find themselves in, carrying out their tasks without regard for morality or humanity. Law facilitated the serial rape of children, and if that made him not much different from others in his position, that doesn’t exonerate him, either.

In 2001 I had the privilege of sharing a pod at The Boston Phoenix with Kristen Lombardi, one of the country’s great investigative reporters. Kristen, who’s now with the Center for Public Integrity, wrote a series of detailed articles showing that Law was reassigning and covering up for the pedophile priests under his command. The following year, The Boston Globe began its remarkable Spotlight series, which resulted in Law’s resignation and a well-deserved Pulitzer for the Globe — not to mention the movie “Spotlight.” (Walter Robinson, who oversaw the Spotlight Team’s coverage of pedophile priests, spoke with WGBH Radio earlier today.)

After fleeing Boston 15 years ago, Law lived the good life in the Vatican. I don’t know if he understood the horror of what he had done, but surely he understood that he was a reviled figure. It’s too bad that, when he was still alive and healthy, Pope Francis didn’t fly him back to Boston under armed guard and order him to fend for himself in the city where he did so much harm. But not only did Francis not take such action, he’s honoring him with his presence at the funeral.

The phrase “banality of evil” is unavoidable in thinking about Law. I doubt he even realized he was doing anything wrong until it was too late. His life demonstrates the importance of exercising our individual conscience and of never putting the needs of an institution ahead of human lives. It would be easy to describe his fall as a tragedy, and I’m sure it was to him. The real tragedy, though, was in the suffering of his victims. 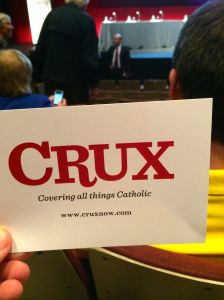 Some two decades ago Cardinal Bernard Law invoked the wrath of God in denouncing The Boston Globe for its coverage of the pedophile-priest scandal. “We call down God’s power on the media, particularly the Globe,” Law told a crowd. Ten years later the Globe had Law himself on the run with a series of reports revealing the cardinal’s role in covering up the scandal.

And now? Cardinal Seán O’Malley was the star panelist Thursday night at an event sponsored by the Globe to mark the debut of Crux, its website devoted to covering the Catholic Church. O’Malley thanked Globe owner John Henry and his wife, Linda Pizzuti Henry, for launching the site. He praised John Allen, recruited from the National Catholic Reporter to write for both Crux and the Globe. And he expressed the hope that Crux would help foster “a better understanding of Catholicism.”

Among the crowd of several hundred: Globe reporter Walter Robinson, who led the Spotlight Team in its Pulitzer Prize-winning coverage of O’Malley’s predecessor. Michael Keaton will play Robinson in the movie.

Needless to say, much has changed over the past dozen years. A lot of it has to do with the man who was the subject of the panel discussion: Pope Francis, whose openness, humility and charisma have given the church an infusion of energy, even as he struggles to deal with the sexual-abuse crisis — an effort in which Cardinal O’Malley is his principal lieutenant.

Indeed, it is hard to imagine a project like Crux without a catalyst such as Francis, the subject of endless fascination since his selection in 2013. “We saw a need for more reporting, more journalism about the church,” said Globe editor Brian McGrory in his introductory remarks.

Crux, as I wrote last week, is a free standalone website aimed at the English-speaking world, and intersects with the Globe only tangentially. How tangentially? Well, this morning Michael O’Loughlin has a story on the BC event in Crux, and Derek Anderson covers it separately for the Globe.

If you were looking for some critical analysis of Francis’ pontificate thus far, you didn’t find much on Thursday. O’Malley called Francis “one of the most extraordinary leaders of our day,” and there was no disagreement from panelists Allen; Mary Ann Glendon, a professor at Harvard Law School and a former ambassador to the Vatican; BC theology professor Hosffman Ospino; and Robert Christian, the editor of Millennial, a website aimed at younger Catholics.

On a range of hot-button social issues such as LGBT rights, divorce and the role of women in the church, panelists talked about Francis’ compassion and outreach but played down the possibility of significant shifts in doctrine. As O’Malley said of the pope, “He hasn’t changed the lyrics, but he’s changed the melody.”

One of the more interesting lines of discussion began when Margery Eagan, who writes a column on spirituality for Crux (and who co-hosts Boston Public Radio on WGBH 89.7 FM), asked if Francis might bridge the gap between someone who is “a liberal Catholic” or “a cafeteria Catholic” such as herself and “a conservative Catholic” such as Glendon.

“I’m going to resist being called a conservative Catholic,” Glendon replied. “I think Francis helps us to explode those categories, which I don’t believe are relevant to Catholics.”

That led to a question from the audience, read by Crux editor Teresa Hanafin (audience members were instructed to write their questions on cards), as to whether Crux could help Catholics get beyond the liberal-conservative divide that Glendon believes is irrelevant.

“The purpose of Crux is to get the story right,” Allen replied, adding it was his goal to offer “an intelligent, thoughtful, serious presentation of the Catholic Church.” He described the divide as having a lot to do with a lack of contact with people outside their own groups: “I think we’re less polarized than tribalized. We live in affinity communities.”

He offered as an example his wife, whom he described as liberal, Jewish and suspicious of conservatives. Several years ago, when he was researching a book about the conservative Catholic organization Opus Dei, he said, his wife became friendly with some of the members.

“Friendship is the magic bullet when it comes to tribalism,” Allen said. “I want to create a space where all these tribes can become friends.”

The Boston Globe’s Pulitzer Prize-winning exposé of the Catholic pedophile-priest scandal and Cardinal Bernard Law’s role in covering it up could be coming to a multiplex near you.

According to Variety, among those involved are director Tom McCarthy, whose credits include “The Station Agent” and “Win Win,” and writer Josh Singer, known for his work on “The West Wing.” McCarthy reportedly has been working on the project in secret for the past year.

“This is a story that feels like it has to be told,” McCarthy said in an interview with the Globe’s Doug Most. “It’s such a great reminder of how essential investigative journalism is today.”

The news prompted a few tweets from the Globe newsroom and beyond yesterday as staffers and former staffers speculated over which actors will play the editors and reporters who produced the ground-breaking stories.

And here’s your almost completely irrelevant link of the day: In 2003 I interviewed McCarthy (and actor Peter Dinklage) about “The Station Agent,” a romantic comedy whose leading man is a dwarf.

Here’s an inspired idea: ProPublica called up my Northeastern colleague Walter Robinson and asked him about the burgeoning pedophile-priest scandal in Europe, which is starting to rattle the papacy itself. Robinson, as I’m sure you know, headed the Boston Globe’s investigative team that won a Pulitzer Prize in 2003 for exposing Cardinal Bernard Law’s complicity in a similar scandal.

Of particular interest are Robinson’s comments about claims that Pope Benedict did not know about what was going on in Germany when he, as Cardinal Joseph Ratzinger, was the archbishop. Robinson says:

The fact we have one archbishop in Munich that claims not to know anything is enough to make one suspicious.

And not just Europe. Today the New York Times reports that the future pope had a hand in enabling and covering up for an American priest “who molested as many as 200 deaf boys.”

To paraphrase a famous question from a different time and place: What did the pope know, and when did he know it?