Just as Congress and the broader electorate are hopelessly divided along partisan and ideological lines, so, too, is the Supreme Court.

And now a partisan battle has broken out over Scalia’s replacement. Despite President Obama’s choice of a respected moderate, federal appeals court judge Merrick Garland, Senate Republican leader Mitch McConnell has vowed not even to take up the nomination. Instead, McConnell insists the decision should be left to the next president.

It’s a dispiriting scenario—and a historical anomaly. As the retired New York Times Supreme Court reporter Linda Greenhouse pointed out Tuesday, we only have to look at fairly recent history to observe a very different dynamic.

After all, President Dwight Eisenhower appointed Earl Warren to the chief justice’s position, and Warren turned out (to Eisenhower’s chagrin) to be one of the most liberal justices in the court’s history. President John F. Kennedy appointed Byron White, who was liberal on civil rights but deeply conservative on social issues. And unlike today, when advocates expend most of their energy trying to persuade just one justice, Anthony Kennedy, years ago there were regularly three, four, or more justices who might vote either way.

“I’m deeply concerned as a citizen and as someone who cares about the court and about the consequences of the politicization of the court,” Greenhouse said. “The Roberts court is allowing the court to be used as a tool of partisan warfare.” As an example, she cited the court’s decision to rule on the legality of Obama’s executive order stopping the deportation of some undocumented immigrants—a decision that she said was accompanied by an overreaching aside questioning whether Obama’s order violated the Constitution.

Greenhouse, who currently teaches at Yale Law School and who still writes online commentaries about the court for the Times, spoke at the Shorenstein Center on Media, Politics and Public Policy, part of Harvard’s Kennedy School. She offered a range of dyspeptic opinions on the political environment both inside and outside the court. To wit:

• On Justice Scalia’s legacy. “I think he degraded the discourse of the court, frankly,” Greenhouse said. “His snarky dissenting opinions were ill-advised and enabled snarkiness in others. I think his, quote, originalist understanding of constitutional interpretation goes nowhere. That died with him.” She added: “He was a very colorful figure and great at calling attention to himself. He was kind of a cult figure. But I don’t think he’ll have much lasting impact.”

• On McConnell’s refusal to consider Obama’s appointment of Judge Garland to the court. “It’s truly unprecedented. … It’s totally cynical. It’s totally playing to the base,” Greenhouse said. She also disagreed with an observation by Shorenstein Center interim director Tom Patterson that Obama should have chosen a woman or a member of a minority group who would be more appealing to Democratic voters. “The brilliance of this nomination,” she said, is that the Garland choice will make Republicans “squirm” because he is exactly the sort of moderate they had earlier said they would confirm.

• On the Supreme Court’s order that the Massachusetts Supreme Judicial Court reconsider the state’s ban on stun guns. By custom, Greenhouse said, the Supreme Court would make such a decision without comment. But Justices Samuel Alito and Clarence Thomas added a caustic opinion suggesting the SJC had put a woman’s safety at risk. “Something’s not right here,” she said. “The idea is you don’t wash your dirty linen in public. … They thought they had to enlighten us with this 10-page screed.”

Greenhouse said that one way to make the court less politicized would be to put more (as in any) politicians on it. At one time during the Warren era, she said, not a single member of the court had served as a federal judge. Warren himself had been governor of California. More recently, Sandra Day O’Connor had served as an elected official in Arizona before entering the judiciary.

“I think a diversity of characteristics on the Supreme Court is very helpful,” she said.

Given that many Supreme Court decisions can go either way (after all, Greenhouse added, the reason most cases are before the court in the first place is because federal appeals courts in different jurisdictions reached opposite conclusions), a politician’s willingness to seek compromise might sometimes be superior than the certainty with which judges with legal backgrounds often act. 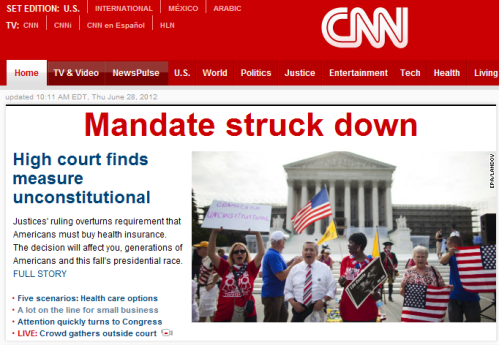 1. I was watching CNN while waiting for the ruling in the mistaken belief that the other cable nets would only be worse. I must admit, listening to Wolf Blitzer and John King trying to backtrack from their whopper made for riveting television. Will heads roll? Should they? People make mistakes, but good grief.

2. Wish I could remember who wrote this, but yesterday I read an analysis that attempted to prove Justice Anthony Kennedy would vote against the individual mandate. So far, so good. But the writer went on to argue that since it was unimaginable Chief Justice John Roberts would come out on Kennedy’s left, that was the end of Obamacare. Personally, I think Roberts looked into the abyss and saw there was no bottom.

3. I thought this was a good time to recycle what I wrote about garcinia cambogia extract for the Guardian after the ACA was approved in 2010. The law isn’t perfect, but it’s an enormous improvement over the status quo. It was — and is — a BFD.

First, Dahlia Lithwick of Slate has a sharp analysis of how U.S. District Court Judge Vaughn Walker crafted his decision by quoting fulsomely from past decisions written by Supreme Court Justice Anthony Kennedy (via @GratuitousV). Noting that Kennedy would surely be the pivotal vote if and when gay marriage comes before the court, Lithwick writes:

Any way you look at it, today’s decision was written for a court of one — Kennedy — the man who has written most eloquently about dignity and freedom and the right to determine one’s own humanity. The real triumph of Perry v. Schwarzenegger may be that it talks in the very loftiest terms about matters rooted in logic, science, money, social psychology, and fact.

Second, Boston.com’s Big Picture posted a terrific series of photos showing gay and lesbian couples getting married. The timing was exquisite: the series was posted a few hours before Judge Walker issued his ruling. Have a look.

I hope Wednesday marks the beginning of the end for marriage discrimination in America, but we all know there’s a long way to go. Among other things, Walker’s opinion was based on the 14th Amendment’s 142-year-old guarantees of equal protection and due process — and the Republican Party, sealing itself ever deeper inside its anti-reality cocoon, is now questioning whether the 14th Amendment should be modified.

Yes, the intent is to find new ways to torment the children of illegal immigrants. But once the amendment is open for discussion, one awful idea tends to lead to another.

Still, Wednesday was a great day, even if it’s too early to celebrate.