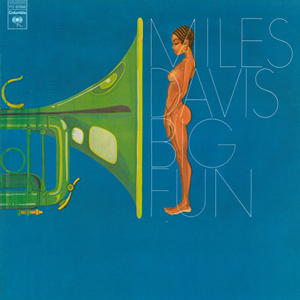 At some point toward the end of my senior year of high school, I acquired a bootleg of the Beatles’ 1965 concert at Shea Stadium. I was not happy with my purchase — it was unlistenable, with screaming fans all but drowning out the music.

Fortunately my friend Jim was a Beatles collector, and he suggested a trade. He’d give me his new copy of Miles Davis’ “Big Fun” in return for the Shea Stadium album. Figuring I had nothing to lose, I agreed. I had heard of Miles, but I didn’t know anything about him except that he played trumpet. “Big Fun,” released in 1974, proved to be life-changing.

Before I get to the music, let me try to describe how cool the packaging was. The front cover featured a nude woman in front of a horn. The inside gateway was given over to a massive photo of Miles, looking down slightly, wearing a serious expression, wraparound sunglasses, a sparkly top of some sort and a polka-dot kerchief. He was holding his trumpet, to which was attached a pickup and a cord. All of this made a huge impression on 17-year-old me.

And the music lived up to the packaging. “Big Fun,” as I now know, was a hodgepodge, pieced together from several sessions over the previous few years. But what a hodgepodge. The original album comprised four tracks, one on each side (the Spotify version features extra tracks). Two are absolutely brilliant.

“Great Expectations” is a riff on “Thus Spoke Zarathustra.” It is repetitive and trance-like, with a huge band anchored by Harvey Brooks on bass guitar and Billy Cobham on drums. There’s not a lot of improvising as Miles tries out different sonic approaches to the same theme. That segues to an entirely different passage as things slow down, Ron Carter takes over on bass (in fact, the track is a spliced-together pastiche) and Miles plays a melody that’s been altered so that it almost sounds like two trumpets, one slightly behind the other. The percussion in the background sounds like someone crying. Although the liner notes don’t say so, this is actually a different piece, Joe Zawinul’s “Orange Lady,” also recorded by Zawinul’s band Weather Report. Trust me: Miles’ version is much better, deeper and more keenly felt.

The other highlight is “Go Ahead John,” featuring guitarist John McLaughlin. In some ways this is a real period piece: Jack DeJohnette’s drums and McLaughlin’s broken-speaker solo are both processed through what you might call extreme stereo, with the audio switching back and forth between speakers. But the piece is so great that it transcends such touches. What’s more, the entire middle part consists of Miles playing a gorgeous two-track solo. This is astonishing music.

OK, I know what you’re thinking: “Big Fun” isn’t Miles’ best album — although I do think it’s better than “Bitches Brew,” his 1970 album that gave birth to the jazz-rock genre. I still love “Big Fun” and listen to it after all these years. And even though I later came to appreciate just about everything Miles ever recorded, “Big Fun” remains an underrated classic from a career that extended from the 1940s to his death in 1991.

Although it’s hard to choose, I think my other favorite Miles album is “’Round About Midnight,” released in 1957 with his classic quintet of John Coltrane on tenor sax, Red Garland on piano, Paul Chambers on bass and Philly Joe Jones on drums. Two years later a slightly different lineup of musicians would release “Kind of Blue,” still the best-selling jazz album of all time. But “Midnight” has more variety to it — and the title track, by Thelonious Monk, is simply the best version of that song ever recorded.

I had the privilege of seeing Miles twice — at Paul’s Mall in 1974 with the aforementioned Jim (we got to shake his hand!) and then at Kix Disco with my wife, the first show of a 1983 comeback tour. Miles didn’t play much at Paul’s Mall, even leaving the stage when he wasn’t soloing. But he was Mr. Entertainment at Kix.

He was a great artist, one of the towering geniuses of 20th-century music. You can listen to Miles endlessly and never get to the bottom, always surprised and delighted by new discoveries. Lately I’ve found myself thinking there’s a decent chance that the trumpet solo on “It Never Entered My Mind” is actually the voice of God. I’ll let you know if I find out.