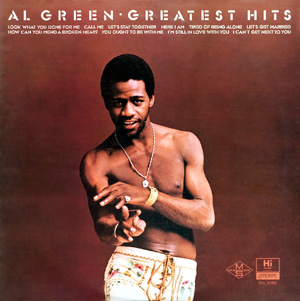 For those of us on the younger end of the baby boom, the great male soul singers came along a little too early. Otis Redding, Wilson Pickett, Sam and Dave, Sam Cooke et al. were integral parts of the 1960s. We’re children of the ’70s. But we had Al Green.

Starting in the early ’70s, Green recorded an extraordinary series of singles. It seemed like he was never off the radio during the first part of that decade. And why would anyone have wanted him to be? Green wasn’t a shouter like some of his predecessors; his voice was more delicate, weaving in and around the song, soaring into the upper register with ease and then back down again. Aretha Franklin may be the greatest singer of the past 75 years, but Green is my favorite. Most of his best moments are on “Greatest Hits,” released in 1975 and repackaged several times since then.

Could anyone hit a snare drum like Al Jackson Jr.? It may seem like a small thing, but there was a particular sound that Jackson got from his drum set, especially the snare, that instantly stamped those songs as Al Green songs. The band was as good as Jackson, and together they created magic.

The list of hits on “Greatest” is overwhelming, starting with “Tired of Being Alone.” President Obama memorably covered “Let’s Stay Together.” Probably my favorite is “L-O-V-E (Love),” which was released in 1975, as Green’s religious side was coming to the fore. Like a lot of Green’s best work, it’s kind of weird. it starts off as a typical love song, and then morphs into something else entirely:

You want more weird? Listen closely to his 1973 hit “You Ought to Be with Me,” which includes the line “You oughta be with me until I die.” The key word in the song is “die,” which he stretches out to form its own soaring one-word chorus. Yes, you’ve heard the song a bunch of times, but were you paying attention?

The 1995 CD re-release of “Greatest Hits” expanded the number of tracks from 10 to 15, adding “L-O-V-E (Love)” and “Love and Happiness,” originally part of “Greatest Hits Vol. 2,” and “Belle,” which he released just before he entered the ministry. For some reason, Spotify’s version harks back to the LP, so I’ll have to put together a playlist.

Green could be prickly. In an appearance on “Saturday Night Live” during his ’70s heyday, I remember him getting angry and calling out his band for some perceived offense. Then, in 2012, we had the privilege of seeing him in Portsmouth, New Hampshire. He was in fine voice and put on a terrific show. But at one point he complained to the audience that the promoter had wanted him to perform for more than an hour. I don’t think any of us thought that was an unreasonable request.

Green can be temperamental, but there are moments that are so perfect that you’re left breathless. If you go to YouTube, you can find two versions of Green singing the Sam Cooke civil-rights classic “A Change Is Gonna Come.” The first, from the 1995 concert for the Rock and Roll Hall of Fame in 1995, is, well, OK. He was clearly having a good time.

The second, from the 2001 United We Stand concert after 9/11, is transformative. Dressed in white, Green is completely serious, a picture of concentration and passion, encapsulating his art into five minutes of anguish and release. It is an astonishing performance.

As one of his albums proclaimed, Al Green is love.