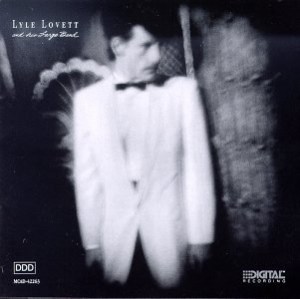 I’m not exactly sure when I first heard “Lyle Lovett and His Large Band,” Lovett’s third album, but it was surely within a year or so of its 1989 release. For a long time I thought his fourth album, “Joshua Judges Ruth” (1992), was his best. But I relistened to both before writing this post, and though I love both albums, “Large Band” is the one that sticks with me.

It’s also the album that remains the backbone of his live shows. The Large Band is an old-style Texas swing band. Their musicianship is impeccable. If you think Lovett’s albums tend to be overproduced, you really need to go to a concert. These musicians are every bit as good and precise in person as they are on record. And they swing.

As for the album itself, it’s divided into two halves, as albums sometimes were before CDs and streaming. Side A is with the full band, and if I have a complaint, it’s that it doesn’t sound much like Texas swing; it’s more like the big-band music your grandparents listened to. That said, the songs are terrific. “Here I Am” (“If it’s not too late, make it a cheeseburger”) and “What Do You Do/The Glory of Love” (a duet with Large Band stalwart Francine Reed) are staples of his concerts.

Side B is all country, including his cover of “Stand By Your Man” (included in the movie “The Crying Game”) and songs that have become Lovett standards, like “I Married Her Just Because She Looks Like You,” “If You Were to Wake Up” and “Nobody Knows Me.” Lovett’s range consists of about three notes — but he knows how to make the best of his limitions, sounding sly or heartbroken depending on what the song calls for.

Starting with “Joshua Judges Ruth,” Lovett expanded into gospel, and the Large Band more explicitly embraced Texas swing. An especially good example of the latter is “That’s Right (You’re Not from Texas),” which is on “The Road from Ensenada” (1996).

Lovett is one of those rare talents who drove me to get all of his albums. I’ve heard almost every one of them, and each has something to offer. My wife and I have seen him three times, all in outdoor venues — the last in August 2017 at a winery near Rockport, Maine. The highlight of that show came near the end, when he brought on a gospel choir he’d bused in from Boston and performed a lengthy gospel set.

Lovett always comes across as humble and grateful for the opportunity to make a living from music. His songwriting may have faded, but he remains a vibrant, relevant performer. We’d go see him every summer if we could.