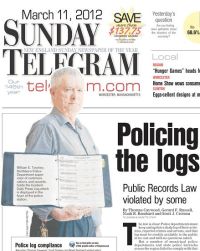 Many police departments in Central Massachusetts violate the law when asked to produce public police-log records, according to an investigation by the Worcester Sunday Telegram. Some flat-out refused. Others demanded identification in violation of the law, and three even went so far as to run a database check on the person requesting the records, the paper reports.

“The law is clear,” the story begins. “Police departments must keep and update a daily log of their activities, reported crimes and arrests, and that log must be readily available to the public at no cost and with no questions asked.”

This interactive graphic provides a quick overview as to which police departments were in compliance and which weren’t.

Any of us who has worked in journalism knows that some police departments cooperate only with reporters they know and trust, despite the state public-records law, which requires them to produce records pertaining to incidents and people who’ve been arrested.

Police departments are not required to produce detailed incident reports about pending investigations.

Whenever I’ve sent students out to obtain police-log records, the results have been mixed. Boston Police, whose headquarters is a short walk from the Northeastern campus, was so accustomed to student requests that they’d form a virtual welcoming committee, giving them everything they needed before they were even asked. I eventually had to require that students visit other police departments — Boston was making it too easy.

But some police departments in Greater Boston were so uncooperative that my students were unable to complete the assignment unless they returned two or three times.

Media lawyer Jonathan Albano, a member of the board of directors of the Northeastern-affiliated New England First Amendment Coalition, tells the Telegram:

This shows why you need the public records law. People in those positions worry about if it’s all right or not to give someone this public information. After a while, they start to think of it as their information and that it’s their job to protect it.

The Telegram’s investigation also demonstrates the dangers of what happens when the police become a law unto themselves.