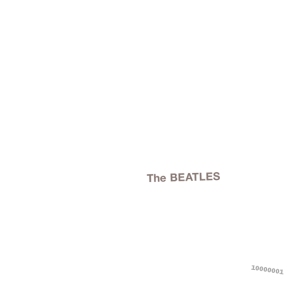 Where do I fit the Beatles into my Top 25? I really struggled with this one. I loved the Beatles when I was a teenager, but as an adult I haven’t gone out of my way to listen to them. For me, at least, they haven’t held up as well as most of the other musicians on this list.

Overexposed? No doubt. I think their heyday came along too early, too. I’d rather listen to George Harrison’s “All Things Must Pass” (1970) than anything they recorded as a group, mainly because George’s masterpiece came along a little later and doesn’t seem as dated. Then again, my favorite music from the ’60s sounds as fresh to me today as it did when I first heard it. But, you know, these are the Beatles we’re talking about, and I’ve got to get them in here somewhere.

“Revolver” (1966) is most people’s consensus pick as their best album, but to me it’s half an album. I love John Lennon’s contributions, especially “She Said She Said” and “Tomorrow Never Knows.” Ringo Starr’s drumming on both those tracks kills me every time. I like George’s “Taxman,” especially Paul McCartney’s guitar solo. But Paul’s tracks leave me cold. He had not yet matured into the songwriter who wrote the band’s last great string of singles, “Lady Madonna,” “Hey Jude” and “Let It Be” among them.

So … “Sgt. Pepper”? There’s a lot to like, and it was hailed as their masterpiece when it was released in 1967. But I don’t think it’s aged all that well. The two best songs recorded for the album, “Strawberry Fields Forever” and “Penny Lane,” got left off because the record company had demanded they be released as singles months earlier. And sorry, but “A Day in the Life” is a lot less profound than we all used to think. But Paul’s bass-playing throughout is revelatory, and the whole album hangs together nicely thanks to George Martin’s brilliant production.

Which brings me to “The Beatles” (1968), better known as the White Album. As countless other critics have complained, the White Album isn’t so much a coherent album as it is a bunch of solo tracks by the four. Some of it is wretched, like Ringo’s “Don’t Pass Me By.” Some of it is self-indulgent crap, like John’s “Revolution #9.” But the songwriting, overall, is superb, and the whole thing is modest and focused on the music rather than any sort of grand “Pepper”-like concept.

It’s also one of those rare albums when Paul and John were both on top of their game at the same time. John’s “Revolution #1” (which I prefer to the amped-up single version), “Happiness Is a Warm Gun,” “I’m So Tired” and “Julia” are standouts, as are Paul’s “Back in the U.S.S.R.,” “Helter Skelter” and “Martha My Dear.”

Then there’s George’s “While My Guitar Gently Weeps,” which features some of the most hilariously ridiculous lyrics on the album. (OK, he gets points for rhyming “inverted” and “perverted.”) But it sounds great thanks to Eric Clapton’s lead guitar, and it’s still a song I’ll turn up loud when it comes on the radio.