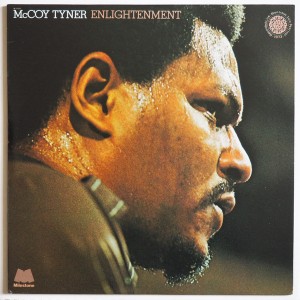 I knew right away what I wanted to play Sunday morning as I thought about the life and death of Ruth Bader Ginsburg. McCoy Tyner’s “Enlightenment” is one of three spiritually intense albums on this list, and it’s the one that speaks most directly to me. Recorded live at the Montreaux Jazz Festival in Switzerland in 1973, it consists of four great musicians addressing the Almighty in as direct a way as you are likely to hear in this plane of existence.

Tyner, who died earlier this year, was one of the leading pianists of the 20th century. He was, among other things, a key player in John Coltrane’s classic quartet — the one that recorded “A Love Supreme” in 1964. I imagine Tyner saw “Enlightenment” as his own answer to “A Love Supreme” — and, truth be told, he doesn’t quite manage to equal Trane’s towering accomplishment. Who has? But I’m going with Tyner because I was introduced to “Enlightenment” when I was a teenager, and thus it resonates with me in a way that goes beyond “A Love Supreme.”

How to describe “Enlightenment”? It’s impossible, really. The bare-bones rundown is that the album comprises the three-part “Enlightenment Suite” plus three additional tracks — “Presence,” “Nebula” and “Walk Spirit, Talk Spirit.” Tyner is all intensity and dense chords. The other musicians, saxophonist Azar Lawrence, bassist Joony Booth and drummer Alphonse Mouzon, are collaborators rather than accompanists — full participants in a common purpose.

Booth’s solo between “Nebula” and “Walk Spirit, Talk Spirit” is astonishing. At the beginning, he sounds like he’s groping for something that’s eluding him. But then he finds it, and what he plays is the closest to singing that you’ll ever hear on an upright bass. Much of the concert is available on YouTube; here are parts one and two. They are well worth watching to get an idea of the level of concentration and sheer physical effort that the band brought to bear.

(By the way, the other spiritually focused albums on the list are Van Morrison’s “Astral Weeks,” No. 12, and Aretha Franklin’s “Amazing Grace,” No. 22.)

I had the good fortune of seeing Tyner perform twice in the 1970s, at Paul’s Mall and the Paradise. He was a great soul whom we’ll all miss, but he left a legacy that will endure. I know that Justice Ginsburg’s tastes tended toward opera. But I’m sure she would recognize the brilliance and the connection to the infinite that Tyner, Lawrence, Booth and Mouzon made in Switzerland one day 47 years ago.

We lost a great one Friday — McCoy Tyner, one of the towering musicians of the 20th century. Tyner was the pianist on Coltrane’s “A Love Supreme” and his own “Enlightenment,” two extended works that are among the most spiritual in jazz. “Enlightenment” is one of my favorite albums.

I had the privilege of seeing Tyner in concert twice, once at the Jazz Workshop in the early ’70s, and then again about four years later at the Paradise.

A few years ago someone shared with me a video of Tyner’s quartet performing the full “Enlightenment” suite at the 1973 Montreux Jazz Festival — the concert that the album documents. I can’t seem to find it, but above is an extended highlight. God Almighty. And I mean that in several different ways.

As 2016 draws to a close, another great artist has died. This one, though, was not a celebrity. Alphonse Mouzon was a terrific jazz drummer with a long, varied career. I know him best from McCoy Tyner’s Enlightenment (above), a suite that was recorded live at Montreux in 1973. (If you’ve never heard it, I recommend it. It is deeply spiritual in the manner of John Coltrane’s A Love Supreme, on which Tyner played.)

According to the New York Times obit, Mouzon “learned this fall that he had neuroendocrine cancer and used a crowdfunding platform to help pay for treatment.” Not that the deaths of Prince, David Bowie, George Michael, Carrie Fisher, et al. weren’t every bit as tragic. But that’s a detail you don’t often see when reading about the death of a musician who at one time was fairly well known.

On Saturday night, during a long drive home from Providence, I listened to the pianist McCoy Tyner‘s “Enlightenment” in its entirety for the first time in a long while. It’s one of those albums that you approach with a degree of seriousness, so normally I tell myself I’ll listen when I can sit still and concentrate. But we all know how few those opportunities are.

Recorded live in 1973 at the Montreaux Jazz Festival, “Enlightenment” is similar in intent and spiritual approach to John Coltrane’s “A Love Supreme,” on which Tyner played. Each combines simple, repetitive melodies and rhythms with dense improvisations. There are some wonderful moments in “Enlightenment.” Among my favorites is Joony Booth’s bass solo at the beginning of the closing track, “Walk Spirit, Talk Spirit.” After a few stumbles, he plays a passage so beautiful you’d swear he was singing.

I was introduced to “Enlightenment” when I was still in high school by the drummer in our band, who always had exquisite taste. Thus it’s more meaningful to me than “A Love Supreme,” even though the latter may be a greater achievement. I saw Tyner twice during the 1970s. The first time may have been at the Jazz Workshop near Copley Square, though I can’t be sure. The second was at the Paradise.

Tyner is a great artist and a great soul. I can’t recommend “Enlightenment” strongly enough.