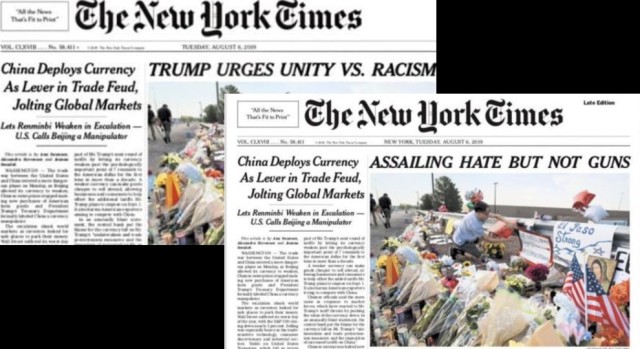 Amid the carnage in El Paso and Dayton, a smaller story played out this week. It’s worth recounting because it has much to tell us about where we are at as a nation — and about the challenges facing journalism as we try to figure out how to cover this awful moment in our history.

The story is about Cesar Sayoc, a Florida man who was sentenced to 20 years in prison for sending pipe bombs to a number of well-known Democrats and media organizations. Fortunately, the bombs did not detonate. In a pre-sentencing letter to the judge, his lawyers wrote that Sayoc was motivated in part by his devotion to President Trump.

“He truly believed wild conspiracy theories he read on the internet, many of which vilified Democrats and spread rumors that Trump supporters were in danger because of them,” according to the letter. “He heard it from the President of the United States. A man with whom he felt he had a deep personal connection.”

Sayoc, needless to say, is responsible for his own actions. But the particular direction in which his demons took him is worth pondering. For many years now, long before he began running for president, Donald Trump has been inflaming the passions of racial hatred, from the Central Park Five to the four congresswomen known as “the Squad.”

Sayoc’s case is important because it bears directly on the massacre in El Paso, where a shooter killed 22 people in the name of a warped, racist ideology that sounded very much like what we hear from Trump on a daily basis — anti-immigrant and anti-“invasion,” with allusions to the so-called replacement theory popular on the far right that elites want to supplant white people with people of color. (No motive has been established in the Dayton shootings, which claimed nine lives.)

In the midst of all this, our leading news organizations remain perplexed at what to do. The New York Times, which on Monday published a valuable, eye-opening front-page story by Peter Baker and Michael D. Shear documenting the parallels between the shooter’s language and Trump’s, lapsed into normalizing this most abnormal of presidents just a few hours later.

Here’s how the lead headline for the next day’s print edition summarized Trump’s remarks, in which he denounced the very white supremacist forces he has fueled: “Trump Urges Unity Vs. Racism.” It was tone-deaf and offensive, and it was soon changed to “Assailing Hate but Not Guns.” But considerable damage had already been done, as the first headline set off a firestorm in media circles and on Twitter.

Jon Allsop, who writes the Columbia Journalism Review’s daily newsletter, called the original headline “particularly egregious” and quoted a tweet from the freelance journalist Yashar Ali: “I have never received more texts from furious NYT reporters/writers than I have tonight. They feel like their hard work is being sullied by a horrible headline. And they’re all blaming [executive editor] Dean Baquet.” As I’ve written previously, even though the Times’ reporting is unmatched, its tone in covering Trump is sometimes weirdly timid and deferential, as if it were covering a speech by Dwight Eisenhower in 1957.

The shootings also pose a dilemma because they weave together several different threads, each of which arguably ought to be covered in different ways. There is the publicity-seeking-gunman angle, which suggests that the media should minimize coverage to the extent possible so as not to inspire copycats. There is the white nationalist angle, which suggests just the opposite — that we need to know as much as we can about home-grown terrorism inspired by racism and hate. And, of course, there is the ever-present gun-control angle.

The story of how white nationalism has emerged as our leading terrorist threat appears to be breaking through. This Axios round-up shows how extensive the coverage has been in recent days. Never mind that white supremacists have always been more of a danger in the United States than Muslim extremists. What matters is that the media and public officials are finally talking about it, and the message appears to be resonating.

Gun control is another matter. We’ve been covering the story of government’s refusal to do anything significant about gun violence for many years now. If the public doesn’t understand that the main obstacles are the National Rifle Association and the Republican Party, then it just hasn’t been paying attention. Still, we can always do better.

Washington Post media columnist Margaret Sullivan wonders if the time has come for journalists to take on more of an advocacy role. “Can the news media really go on a righteous crusade about gun laws — or about identifying white supremacy — while maintaining their roles as truth-tellers?” she asks. Her answer: “Maybe we in the news media don’t really expect to help achieve different results. But if journalism is to be true to its public-service role, we must.”

Sullivan’s view is ultimately an optimistic one, so perhaps I should end this right there. But we all know that the hopeful approach isn’t always the right approach. And so I’ll leave you with this essay in The Atlantic by John Temple, who was editor of the now-defunct Rocky Mountain News in Denver at the time of Columbine shootings in 1999 — the incident that, along with the Oklahoma City bombing in 1995, set off the modern era of mass killings.

Temple tell us that “despite our dedication to the work, despite the countless investigations, projects, and special reports, it feels like nothing has changed. Columbine, if anything, opened a door that we can’t close. Copycats saw what happened and learned their own lessons.” He concludes: “Journalists feel the need to bear witness. But to the same horror, again and again? I can’t say anymore that I believe we learn from terrible things. I can say that I’ve seen the limits of journalism — and of hope. And I’m struggling with what to do about it.”

So here’s my short list of what we ought to do: Stop normalizing Trump and his hateful rhetoric. Tell the story of white nationalist terrorism. Push for gun-control laws, guided by experts who understand what works and what doesn’t.

And be humble enough to realize, as Temple does, that journalism can only accomplish so much.