Later this year the Banyan Project is scheduled to roll out its first cooperatively owned news site in the city of Haverhill, to be called Haverhill Matters. Banyan founder Tom Stites’ vision is to serve what he calls “news deserts” — low- and moderate-income communities, mainly urban, that are underserved by traditional media. What follows is the second of several blog posts in which I will attempt to assess the media landscape in Haverhill as it exists today.

Brian is on the line, and he’s got an idea. City officials in Haverhill have announced that they plan to reopen a former rest stop along Route 110, closed 15 years ago when it became overrun with drug dealing and illicit sex. Brian’s suggestion: a webcam.

Tim Coco, host of “The Open Mike Show” on WHAV Radio (as well as the station’s founder and chief executive), wonders out loud what Mayor James Fiorentini would make of Brian’s idea. He cracks a joke about the National Security Agency watching the webcam.

“That doesn’t offend your sense of security then?” Coco asks.

“No, I wouldn’t even think about it,” Brian responds.

And so it goes for two hours, as Coco talks about Haverhill news, history and trivia with a handful of callers.

Since 2004, Coco has been running WHAV out of his advertising agency, Coco & Co., located in an office park off Route 495 in the Ward Hill section of Haverhill. The station is mostly online (at www.whav.net) and mostly automated.

But Coco’s got big ideas. By mid-2014, he hopes to have obtained a lower-power FM license from the FCC so that he can reach all of Haverhill — something that is only barely possible now with the station’s weak AM signal, at 1640. He also hopes to pump up the station’s live, local public-affairs programming, replacing all or most of the oldies music that now fills most of the day.

“The Merrimack Valley requires an independent voice,” Coco wrote in a fundraising pitch titled “WHAV’s Democracy, Independence & Sustainability Project.” “With support, the reborn and not-for-profit WHAV is not only well-positioned to become that institution, but serve as a model for other community media efforts.”

I spent the better part of a day with Coco last week. A 52-year-old Haverhill native, he is a former journalist, having worked at the original WHAV (founded in 1947 and affiliated with The Haverhill Gazette, then an independent daily newspaper) and, later, at The Daily News of Newburyport and as the editor of an environmental trade magazine based in Manchester, N.H.

Although the current version of WHAV is only nine years old, Coco clearly sees the station as an extension of the original, which, like so many stations, fell victim to corporate buyouts. The small studio from which he broadcasts “Open Mike” every Monday from 6:30 to 8:30 p.m. has been rather grandly dubbed the Edwin V. Johnson Newsroom, after a beloved WHAV news director and Haverhill High School teacher. Among the past employees of WHAV are retired WBZ news anchor Gary LaPierre and Tom Bergeron, the host of ABC’s “Dancing with the Stars.”

“I read the news, Tom Bergeron read the jokes and look where he is today,” said Coco with a laugh. “That is the lot of news people, isn’t it?”

Coco is a well-known public figure in Haverhill. He is a member of the Haverhill Licence Commission, serves on various civic boards and in 2012 was a candidate for the Massachusetts Senate. (He stepped away from “Open Mike” during the campaign.) Although he lost the Democratic primary to the eventual winner, Kathleen O’Connor Ives, he is quick to point out that he won Haverhill. Coco and his husband, Genesio “Junior” Oliveira, have fought a high-profile battle to prevent Oliveira from being deported to his native Brazil — a battle that Coco hopes is over now that the Defense of Marriage Act has been ruled unconstitutional.

At one time, many communities had their own independent radio station. But cultural and regulatory changes — the Telecommunications Act of 1996 being an especially harmful example of the latter — led to the consolidation of the radio business and the rise of chain ownership. Coco is passionate about these changes, and in June hosted a fundraising event for the station with a showing of “Corporate FM: The Killing of Local Commercial Radio.” (I took part in a panel discussion that followed the screening.)

What Coco is attempting with WHAV is the revival of the old-fashioned local radio station. Right now, he admits, he does it essentially with smoke and mirrors. “I’m embarrassed to say, actually, that we’re doing it the way corporate radio does it, which is a lot of automation,” he said. “Believe me, it’s less than ideal, and I want to get to a point where we’re staffed at least 18 hours a day.”

Nevertheless, there is some local programming, such as “Open Mike,” as well as syndicated programming from left-leaning services such as Pacifica and Free Speech Radio News that are not often heard on the airwaves. Thom Hartmann, a syndicated liberal talk-show host, is on from 3 to 6 p.m. every weekday. Old-time radio dramas, including “Our Miss Brooks” and “Gunsmoke,” are heard at 10 p.m.

A jaunty jingle (“Catch the Wave!”) is interjected at regular intervals. Among the funders: Northern Essex Community College, of which Coco is an alumnus (he is a graduate of Lesley University), and the Merrimack Valley Economic Development Council (Coco is a board member).

Most important, there is local news, some of it reported by Coco. He also has a part-time public affairs manager, Nathan Webster, as well as two summer interns. Local weather is provided by Hometown Forecast Services in Nashua, N.H., which Coco says is more Merrimack Valley-specific than what the Boston stations are able to offer. “Community Spotlight” consists of brief announcements about local events and community organizations. 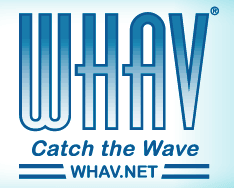 WHAV’s microscopic news operation can’t compete with what’s offered by the daily Eagle-Tribune and its affiliated weekly, The Haverhill Gazette. But Coco said his station sometimes breaks stories, and as example he cited one that he reported himself — a downtown development proposal being led by the Roman Catholic Archdiocese of Boston. (Here is The Eagle-Tribune’s story on the proposal.)

“They do feel us a little bit now,” Coco said. “We have been beating them on stories, and they’re starting to pay attention.” (As I wrote last week, Eagle-Tribune editor Al White declined my  request for an interview.)

How many people does WHAV reach? It’s a difficult question to answer. One month last fall, Coco said, some 62,000 unique users tuned in to the Internet station, though he added that drops off considerably during the summer. He said he has no way of knowing how many listeners tune in to the AM signal, or to the simulcast that runs during parts of the day on local-access cable stations in Haverhill, Andover, Methuen and the New Hampshire communities of Plaistow and Sandown. (The station was thrown off the Groveland cable system in 2007. Coco claims the action was taken because the then-host of “Open Mike” was criticizing local politicians.)

But there’s no question the station’s listenership should increase if Coco succeeds in obtaining a low-power FM (LPFM) license from the FCC. Coco will apply this October, and could receive approval within about nine months if there are no competing applications or other complications. The proposal — for a 23-watt signal — “should well cover Haverhill,” Coco said. The broadcast frequency is likely to be 98.1 FM.

The LPFM program was created in 2000 to offset the decline of local commercial radio. LPFM licenses are available only to nonprofit organizations, and in 2011 Coco formed Public Media of New England as a 501(c)(3) entity to act as WHAV’s umbrella operation.

As WHAV expands, it’s going to need more programming in general and more local programming in particular. Coco is a member of the organizing committee for Haverhill Matters, the cooperatively owned news site that the Banyan Project is scheduled to launch before the end of 2013.

Coco expects to broadcast repurposed content from Haverhill Matters on WHAV, and added that he can also play a role in providing some of the “institutional memory” for Haverhill Matters that may be lacking with “newbie reporters.” Although Haverhill Matters will hire a full-time professional editor, Banyan Project founder Tom Stites and the organizing committee also talk about using interns from Northern Essex Community College, neighborhood bloggers and the like.

Haverhill Matters and an expanded WHAV both represent ambitious visions for local, independent media organizations, and it will take a certain amount of blind faith — my phrase, not Coco’s — for those visions to become a reality.

“It isn’t feasible, and this isn’t feasible,” Coco said, referring to Haverhill Matters and to his own efforts at WHAV. “And I do have some long-term worries in both cases.”

Later in the day, Coco played tour guide, driving me around Haverhill, from a downtown damaged by an urban renewal project that never quite came to pass to more rural sections such as Winnekenni Castle and the John Greenleaf Whittier Birthplace, for which Coco serves as president of the board of trustees.

“I feel like George Bailey from ‘It’s a Wonderful Life,’” Coco said “I really didn’t get to leave Bedford Falls. Whether we remain Bedford Falls or become Pottersville remains to be seen.”

Coco believes that strong, independent local media are a key to keeping his Bedford Falls vision of Haverhill intact. The next few years will be crucial to determining whether he and the folks at Haverhill Matters can succeed.