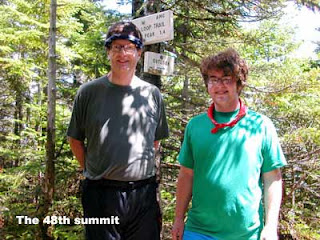 Right around lunchtime on Saturday, Sept. 28, 1968, I struggled to the top of Mt. Pierce, also known as Mt. Clinton. I was a 12-year-old Boy Scout, out of shape, out of breath, wondering what I’d gotten myself into.

At 4,310 feet in elevation, Pierce was the first 4,000-foot mountain I had ever hiked; for that matter, it was the first mountain of any size whose summit I had reached. By the end of the day, I would also hike to the top of Mt. Pleasant (now Mt. Eisenhower). We camped at Lakes of the Clouds, an activity that, because of the fragile alpine vegetation, would become a federal crime within a few years. The next morning, beset by clouds, wind and rime ice, we struggled to the top of Mt. Washington (6,288 feet), the highest peak in New England and home to what is often described as the worst weather in the world.

Once I got over my never-again reaction, I was hooked. I learned that there are 48 peaks in New Hampshire of 4,000 feet or more, and that a few serious hikers set out to reach them all. I plugged away, hitting a lot in the ’70s and a few in the ’80s and ’90s. Starting in 2000, when my son, Tim, was old enough to come with me, I resolved to finish the list before I was too old and decrepit to do it anymore.

This past Saturday, just shy of my 51st birthday, I made it. It took me nearly 39 years, which might be some sort of a record — albeit a very different record from the one set by an ultramarathoner named Tim Seaver a few year ago. Seaver did all 48 mountains in less than four days.

My son and I drove to Lincoln, N.H., on Friday, and set up camp at Big Rock. It rained all night, which made me wonder about the forecast of blue skies for Saturday. As it turned out, the weather was almost perfect — cool and not too sunny, if a bit on the humid side. We started out along the Hancock Notch Trail, from the Kancamagus Highway, at 9:30 a.m. The footing was flat and easy, and by a little after 11 we had reached the split on the Hancock Loop Trail, which would take us to the north and south peaks of Mt. Hancock — summits number 47 and 48. 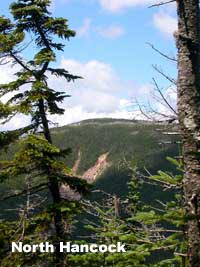 Which one to take first? The hike up the north peak was a bit longer (0.7 mile as opposed to 0.5), and also steeper, with rougher footing. Tim and I decided to go up the north side so that we wouldn’t have to hike down it and risk our necks. It turned out to be a good decision — there was a lot of loose rock, and there’s no way we would have wanted to try to descend along that route.

The hike to the top was pretty much straight up, and we had to pause frequently to catch our breath. We reached the summit around noon. There was a great view from the nearby outlook, and I wish we’d stayed longer. But I wanted to make it to my final summit as soon as possible.

We hit the summit of the south peak right around 1 p.m. I’d done it. It was also Tim’s 17th 4,000-footer, so he’s well on his way. A guy from Worcester named Steve, who was hiking with his girlfriend and another couple, took our picture. Steve, who’s

We made it back to the car before 4 p.m. and headed off to the Yankee Smokehouse. And thus ended a journey that took in parts of five decades. I’m sending in my application to the Four Thousand Footer Club today.